If it wasn’t for bad luck, Sammy Blais would seem to have no luck at all.

The Ranger hard-hitting young forward was a full participant at practice on Sunday and is ready to make his debut tomorrow night against the Anaheim Ducks.

“He’s cleared to play,” Gerard Gallant said. “I just want him to play his game. Be physical, bump bodies, go to the net, and play strong hockey. He’s a big part of our group– keep the game simple and play it hard.”

Blais, 26, was hit hard by Islanders defenseman Alexandar Romanov in the team’s final preseason game last weekend. It was a real blow for him after missing over 10 months due to surgery to repair a torn ACL suffered in November of last season.

“I feel really good,” Blais said. “I think the two more days (off) helped me be ready. It was kind of a bummer to get hurt in preseason. I was pretty mad about it, but I felt good today and I’ll be ready for tomorrow.”

By all accounts, Blais was lobbying to get back into the lineup and even made the two game road trip. However, Gallant made the decision to hold him out knowing the team was going to have some time off before facing the Ducks on Monday night.

“I understand he really wanted to play. As a medical staff and as coaches we have to take care of him,” Gallant revealed. “It’s a tough decision because as players we always want to play. He’s ready to go now, feeling good and strong.”

Kravtsov, 22, has recored 4 points in 21 games since being drafted 9th overall by the Blueshirts in 2018. This season, he was itching to prove his worth after not seeing eye-to-eye with management and leaving for Russia instead of playing in the AHL with the Hartford Wolf Pack in 2021-22.

Unfortunately, he only played a few shifts in the opener against Tampa Bay before getting hurt.

On the play, Lightning defenseman Victor Hedman took advantage of an off-balance Kravtsov, who was already on his knees heading into the boards. Hedman put his knee into Kravtsov’s chest and proceeded to shove his head down causing an upper-body injury.

Kravtsov was back at practice today with the Rangers which is a good sign.

“Yeah it’s good– he’s still day to day with the no-contact jersey on,” Gallant updated on Kravtsov. “That could change tomorrow morning, but it’s good to see him out there doing some skating.”

Meanwhile, Ryan Carpenter was not at practice after suffering a very scary cut to his head and ear in Winnipeg.

Late in the second period, the 29 year-old center tried to get around the Jets defender to steal the puck. In the attempt, both players went down and Carpenter fell face first on the Jets player’s skate causing a deep laceration. He left for the locker-room bleeding badly and didn’t return for the third period.

Gallant stated that he remains day-to-day.

Based on all the information relayed by the coach and practice lines reported at practice, tomorrow’s lineup could look as follows:

“Things can change from now till tomorrow,” Gallant concluded. 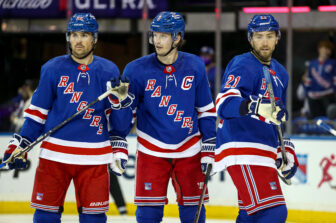