When the New York Rangers called out Alexis Lafrenière’s name in 2020 after winning the lottery, it marked the first time they had the top pick in the modern day draft.

This will be Lafrenière’s third year in the league and he’s looking to build on a strong sophomore campaign. In 2021-22, the 20 year-old scored 19 goals and 31 points in 79 games. He capped them off with a very strong playoff performance by adding 9 points in 20 contests.

In 2022-23, if things going according to plan, he will play on the top line leading to a serious uptick in minutes and very likely points.

It couldn’t come at a better time with Lafrenière entering the final year of his entry-level contract worth a team friendly $925,000 against the cap.

On Wednesday, the Ottawa Senators announced an 8-year contract extension for Tim Stutzle worth $66.8 million. That’s an AAV of $8.35 million and a big headache for the Rangers concerning Lafreniere.

When the news hit the wire, a league source immediately told me to bust out my calculator because he doesn’t see Lafreniere signing for less.

The first thing the Rangers and Lafrenière will do before sitting down to talk contract extension is to find comparables. It may still be a little too early to identify enough good ones, but it’s hard not see Stutzle as a possibility.

Stutzle, 20, was chosen by the Senators as the third overall pick in the 2020 NHL Draft. Selected behind Alexis Lafrenière and Quinton Byfield (Los Angeles Kings) respectively, outperforming them both to date on the score sheet.

Now I know what you are saying, how could Stutzle be a good comparable?

Well, let’s start with the fact they were both drafted in the same year and that will definitely be brought up in negotiations. Then you have to go beyond the surface numbers, which Stutzle has a clear advantage because he averaged 18:24 per game last year versus Lafreniere’s 13:59.

However, Lafrenière’s camp will highlight the fact that his 5v5 points per 60 minutes of play (p/60) is 1.70, which is higher than Stutzle’s 1.54 over their first two seasons in the NHL.

All of a sudden, Stutzle as a comparable isn’t so outlandish is it? And what happens once Alexis starts playing 18 minutes a night with power play time with Mika Zibanejad and Chris Krieder?

Bottom line is simpLe– Alexis Lafrenière is going to be in line for a big raise.

Get your calculators ready indeed! 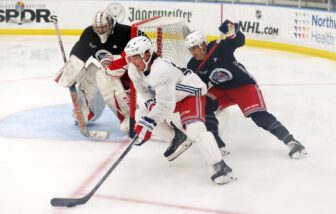