The Carolina Hurricanes Are Open for Business 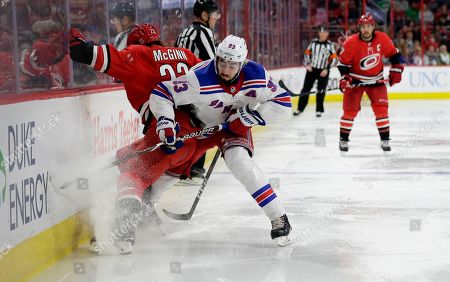 As all serious Rangers fans know, the Rangers received the ninth overall selection in the 2018 NHL Entry Draft. And if the Rangers want to make a splash, they may want to look south to make a deal.

Carolina, Montreal & Buffalo TBD in the 2nd intermission of Vegas vs SJ

After finishing eighth from the bottom in the regular season, the Rangers hoped to win the draft lottery and slide into the top three. However, instead of moving up in the order, they slid back one slot. While this was not really unexpected, as the chances of picking ninth were nearly identical to picking eighth, the deflation of the fan base could be felt on Twitter.

While disappointing, if the Rangers stay at number nine, they will get the chance to pick a very high-quality player. There are some very high-end talents that will be available when the Rangers pick including the likes of Oliver Wahlstrom and Quinn Hughes. Any player that the Rangers pick will immediately move toward the top of the Rangers prospect rankings.

A MATCH MADE IN HEAVEN

While this has the makings of a deal, I believe there are a few other options that could also get the deal done without trading our number one center.

This, along with the number nine selection, would not be enough to get it done. In addition to Zibanejad, the Rangers have Kevin Hayes, Vladislav Namestikov, Ryan Spooner, Filip Chytil, Lias Anderson, and Brett Howden at the center position. Packaging one of Spooner, Hayes, or Namestikov with Zuccarello and the ninth overall could get the deal done if the Hurricanes want to compete this year.

HEIR TO THE THRONE…IN CAROLINA?

If the Hurricanes feel like they are more than a year or two from contention, they may be looking for prospects and picks as opposed to roster players. Following the Hurricanes needs of a center and goalie, the Rangers still have great organizational depth at both positions. This year, the Rangers have three first-round picks, two second-round picks, and two third-round picks. Additionally, the Rangers center and goalie depth are very good. Although Igor Shestyorkin is considered to be the heir apparent to Henrik Lundqvist, the Rangers have a few years left of Lundqvist before they need to replace him.

Additionally, Shestyorkin, while very talented, is unproven in North America and goalies are notoriously hard to predict. Packaging Shestyorkin with the ninth overall, one of Hayes, Namestikov, Spooner, and a Rangers second-round pick would be enough to get into the conversation.

While the deals mentioned above may not be quite enough to snatch the second overall pick, and I may be somewhat biased, they do get the Rangers into a serious conversation with the Hurricanes. The Rangers organizational depth and the organizational needs of the Hurricanes match up very well. If the Hurricanes are looking to make a deal, the Rangers are automatically on the short list of teams that will be considered. They are in the ideal 5-10 range that Anthony mentions and have assets that the Hurricanes could be interested in. Maybe, just maybe, the Rangers can pull off a deal and get that elite talent they so desperately need.