The Leafs, What A Rangers Rebuild Could Look Like

The New York Rangers are currently in the early stages of a team rebuild. Last February, the organization did the equivalent of punting on 3rd down and decided to trade off many of its notable stars like Ryan McDonagh, Rick Nash, J.T. Miller, and Michael Grabner. The previous summer, the Rangers parted ways with Derek Stepan, and prior to that, defenseman Daniel Girardi and center Derick Brassard. After many seasons of long playoff runs and numerous amounts of noteworthy moments, the rebuild was confirmed, as the team missed the playoffs for the first time in ten seasons.

On the other side are the Toronto Maple Leafs. Toronto began their rebuild not too long ago and now are reaping the benefits of said rebuild, as Joffrey Lupul, David Clarkson, Dion Phaneuf, and Phil Kessel were replaced by the likes of Auston Matthews, Mitch Marner, William Nylander, and numerous other younger players that are now ready to take the helm of their franchise and begin their quest for the Stanley Cup.

Ripping a team down is tough for the fans to see and many Ranger fans are not accustomed to seeing their blueshirts down and out for the count, so I reached out to Tip of the Tower podcast co-host and friend of mine, Austin Owens to discuss the ins and outs of a rebuild and what Rangers fans should expect going forward.

JL: So, tell me the circumstances about how Toronto began their rebuild. Obviously there was a breaking point to where the franchise felt they needed to step back and reel everything in.

Owens: The writing was essentially on the wall during the 2014-15 season for the Maple Leafs. They were in a playoff spot and over .500 through a good portion of the season when the team fired then head coach Randy Carlyle.

Peter Horacek stepped in to help guide the team to the end, but was let go following the end of the campaign.

The Leafs needed to pull the trigger on a rebuild for a while. Their playoff berth during the 2012-13 season gave the brass and fanbase optimism that the organization was turning a corner. But with the team having little depth behind Phil Kessel, James van Riemsdyk, Tyler Bozak, and Dion Phaneuf, it was the right time to go that route. 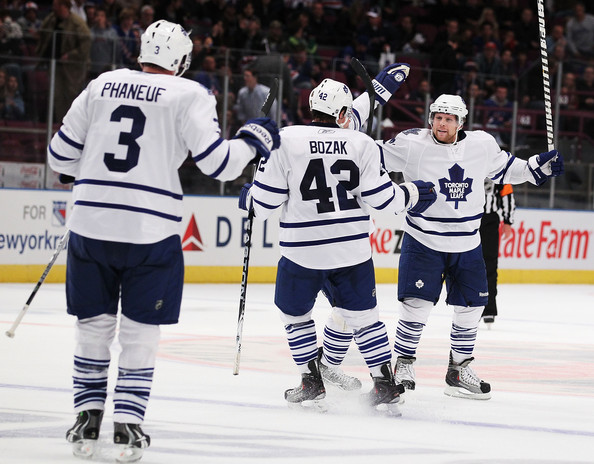 JL: How did the Maple Leafs go about tearing it down? Was it direct or did it take some time?

Owens: With Mike Babcock coming in ahead of the 2015-16 campaign, it looked as though the Leafs would operate as always – playing below .500 hockey and then making a last-minute playoff push that left them both out of the postseason and with a lower draft pick.

The first sign of a rebuild was the trade that sent Phil Kessel to Pittsburgh. With draft picks and prospects coming back for the star of the team, it was clear where the team was headed. The team started off with a lineup littered with bottom six players – All due respect to them, they did admirably with the roles they were asked to fill. The big shocker was Phanuef being moved ahead of the trade deadline. The Leafs essentially took on expiring contracts for the former captain. The best part of the deal was Lou Lamoriello somehow managing to not retain any of Phanuef’s salary in the deal.

Phanuef’s massive cap hit made it very difficult for the Leafs to keep him. That was the trade that truly solidified the Leafs’ tanking efforts to get Auston Matthews.

JL: The fan reaction must’ve been insane, considering Toronto is probably the hot bed for hockey, media wise. Did the fan base take it well at the time?

Owens: Surprisingly, no. The Leafs had been in a rut for a long time. Up until 2013, they hadn’t made the postseason since 2004.  Leafs fans were getting pretty used to being the butt of every joke, so what difference was one more bad season in an already miserable stretch?

Leafs fans were less interested in the play of the NHL team and more fixated on both the Marlies and prospects – namely William Nylander and Mitch Marner. Newly appointed AGM’s Kyle Dubas and Mark Hunter had arguably the best draft class in Leafs history and there was a lot to look forward to on that front. The Marlies were in the Calder Cup playoffs consistently as well, so that gave fans a distraction in the spring.

JL: Tell me about some of the benefits of the Maple Leafs rebuild and possibly some of the negatives, if any?

Owens: The benefits of the rebuild were simple: Sacrifice a bit of your happiness now to enjoy success for the next decade-plus. In hockey, we’ve seen teams go through big rebuilds and grow to dominate the league. Pittsburgh and Chicago are the easiest examples of teams who turned around their respective futures with a few good picks.  The positives pre-Matthews were Nylander and Marner. The former was up the street playing for the Marlies, allowing fans to get a look at the future on a weekly basis. The latter was about two hours away in London, Ont., with the Knights. He could be seen on Youtube or social media doing something impressive on almost a weekly basis.

I remember going to the opening game of the 2015 World Juniors and seeing Sweden play the Czechs. It was Nylander’s first game in the Air Canada Centre since being drafted. He received a standing ovation from the fans and a “Willy” chant every time he touched the puck. It was a great sight to finally see the joy back in the building.

The negative was obviously losing, but Leafs fans were already pretty used to with the team, so that wasn’t a big deal.

JL: Seeing that the Rangers are currently beginning their rebuild, what should fans expect from this rebuild and are there parallels between the two rebuilds?

Owens: There are certain parallels that can be drawn currently. The Rangers clearly bought into the concept of rebuilding with the dealing of prominent players and the hiring of David Quinn – who has an extensive history of working with and developing young talent at the NCAA level.  The key to the Leafs’ rebuild was the switch of ideology in drafting players. When Nylander was selected in the 2014 draft, it was a shock to many, but something that was a no brainer pick for Toronto.

I say it came as a shock because of the draft tendencies from the previous regimes. Just a year prior, the Leafs selected Frederik Gauthier 21st overall. He was lauded by management as being “The Leafs third line centre of the future,” because that’s exactly what you want to hear about a prospect your team just spent a first-round pick on, right?

In 2011, they selected Tyler Biggs 22nd overall. Who, you may ask. Exactly.  Biggs was probably the most infamous bust in Maple Leafs history. However, he did help get the Kessel deal done, so there’s that.

Truculence was a word synonymous with the late Brian Burke-era Leafs. When they switched to drafting smaller, but more skilled players, everything changed. Yes, Gauthier is currently the Leafs’ fourth-line centre (looks like the scouts were spot on), but without the skilled players taken over the past five years, the Leafs – and more importantly the Marlies – wouldn’t be where they are.

Drafting is the most important thing to remember in a rebuild. Edmonton is a great example. Sure, they had four first overall picks in a span of six years, but past the first two rounds, they rarely hit on their picks. It goes without saying that the back half of the draft is just as important for your franchise as the flashy names at the top of the list. 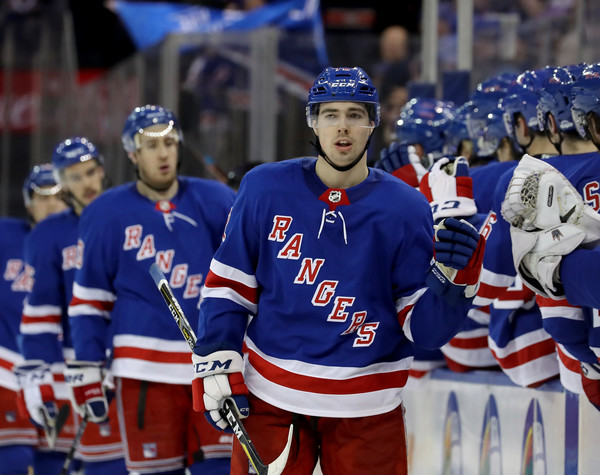 The surplus of picks and prospects won’t only help the Rangers, but Hartford as well. The goal of the AHL is to have a team grow together and graduate to the NHL. The Tampa Bay Lightning’s current core won a Calder Cup together with Norfolk in 2012 and was ripping up the NHL the next season. That’s the goal for every franchise.

In terms of parallels, player development might be the best comparison. Toronto kept Nylander in the minors for two seasons before he made the jump to the NHL at the end of the 2015-16 season. Same went with Connor Brown, Kasperi Kapanen, and Andreas Johnsson – who are now all full-time NHL’ers.

The Rangers did the same thing with Lias Andersson, who is arguably the top prospect in the system currently. Some players have to be given time to grow, especially if they’re coming from overseas. While many Rangers fans would’ve undoubtedly liked to see him in the NHL this season, this was the better move for his long-term success.

JL: I know you hate me saying this, but maybe Nylander to the Rangers?

JL: At the end of the day, from someone who has seen his favourite hockey team go through a rebuild, what would you want to tell Ranger fans reading this piece that are unsure or dont know what to think when their team is down in the dumps?

Owens: I always preach patience in this situation – and that’s not easy when you’re so used to seeing winning hockey. But if a season or two of perpetual sadness means that you’re organization will be a contender in for the next 15 years, then you take it.

Mike Babcock famously said in his introductory interview that there would be pain in Toronto. That made it very clear to everyone what to expect going forward. Jeff Gorton made a very similar move by putting out the letter to fans telling them what direction the team was headed. The Rangers have some great pieces that they’ve added over the past six months. While Vitali Kravtsov wasn’t projected to go as high as the Rangers took him, he looks like a dynamic talent who will be tearing up the league in a few years.

I personally love K’Andre Miller and was hoping he was still available when the Leafs picked at 25. He’s a physical beast who has the offensive upside and defensive game to be a top-four defender in the NHL.

Nils Lundkvist can be a very good offensive-minded rearguard down the road. But he needs more seasoning in Sweden. He was a late riser in the draft, and for good reason: he’s an extremely impressive player. There was talk of the Rangers trading those picks for future assets. In the situation they’re in, the best course of action was to take the best player on the board in each respective position.

In short, stay patient. losing is not easy. But there’s some fantastic pieces on the way. Give them the time to develop and they will pay the fans’ patience back with wins and, hopefully, cups.

Big thanks to Austin Owens from Tip Of The Tower podcast for taking some time out to deliver some insight on what a successful rebuild can look like, through a Leafs’ fan perspective. Feel free to follow him on Twitter (@_AustinOwens) as well as myself (@JLChaparro).