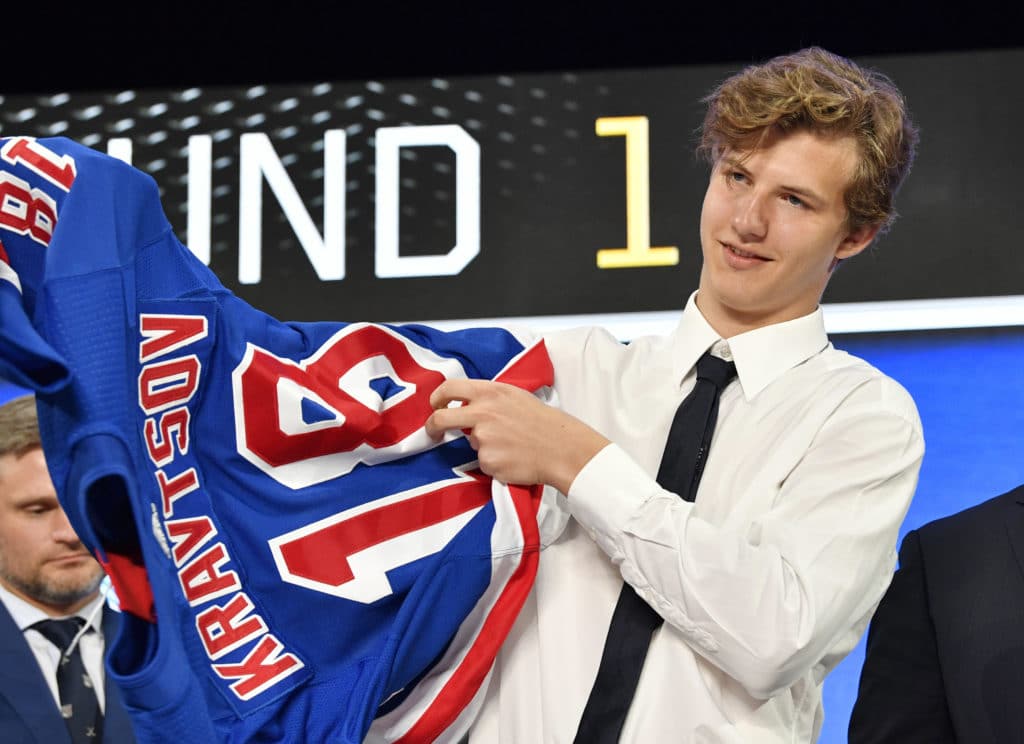 Vitali Kravtsov, the ninth overall pick in the 2018 NHL Entry Draft has a decision to make. Should he have his contract bought out and he’d come over to the Rangers organization this year or should he finish his current contract with his KHL team and come for the next season. As of right now, it’s up in the air. If you’re like me, you weren’t initially thrilled that the Rangers passed up on Oliver Wahlstrom, the apparent “best goal scorer in the draft” but that is all behind us now. There was a reason that Jeff Gorton and the rest of the Rangers organization chose Kravtsov. If I were Gorton and Kravtsov, I think the choice is clear, come to New York as soon as possible.

We all know that the upcoming NHL season will not be a pretty one, or at least that’s what I’d like to assume. The Rangers are starting to show signs that they’re going younger throughout the system. In using all but one of the many draft picks that they acquired for this draft (traded a second rounder to move up for K’Andre Miller), the Rangers showed that they trust their scouts to find new talent. Instead of dealing their many picks and overpaying to either trade up early or trade for a veteran asset for next season, they stayed the course and stocked up on prospects. Though many of these prospects won’t make the opening night roster, there are still a few young players to build chemistry with. Kravtsov will have Lias Andersson, Filip Chytil, Brady Skjei, Pavel Buchnevich and maybe even a few other prospects to build a relationship with on and off the ice. The more ice time Kravstov gets in North America, the better he’ll adjust.

It’s no secret that there may be some growing pains, or in this case shrinking pains, when international players come to the NHL. The North American ice surface is significantly smaller compared to almost every other league around the world. This surprisingly could have an interesting impact on the Rangers ninth overall pick. Though a roster spot is not guaranteed, even if Kravtsov starts in Hartford this next season, the ice adjustment will still be in full swing. If Kravtsov does, in fact, make the roster out of camp he has another hurdle to overcome and that’s a whole new system under a new coach. Though the whole team will be dealing with this change, it might be beneficial that the KHL’s reigning rookie of the year experience this with everybody else. It’ll also be interesting to see Quinn’s approach to this youngster and the talents he can develop.

He Can Handle a Men’s Game

Obviously this situation wouldn’t be occurring if Kravstov didn’t want to be with the Rangers. Requesting to join the team, or at least be part of the system, shows that he’s ready to advance to the top-level in the hockey world. I’m sure by now he’s seen and heard certain fans’ reactions towards the Rangers pick but obviously he isn’t phased by it. Watching his highlights and his overall play shows he can compete with men. The KHL isn’t a developmental league or a junior league or even the AHL to some degree. This is where men play and he’s shown he can handle that high speed, physical game. Though the decision will ultimately be up to Jeff Gorton and the front office – they’ll be paying for that buyout – I believe they shouldn’t pass up on an opportunity to let the kid dive right in.