Two Rangers On List Of Most Memorable Goals in American History 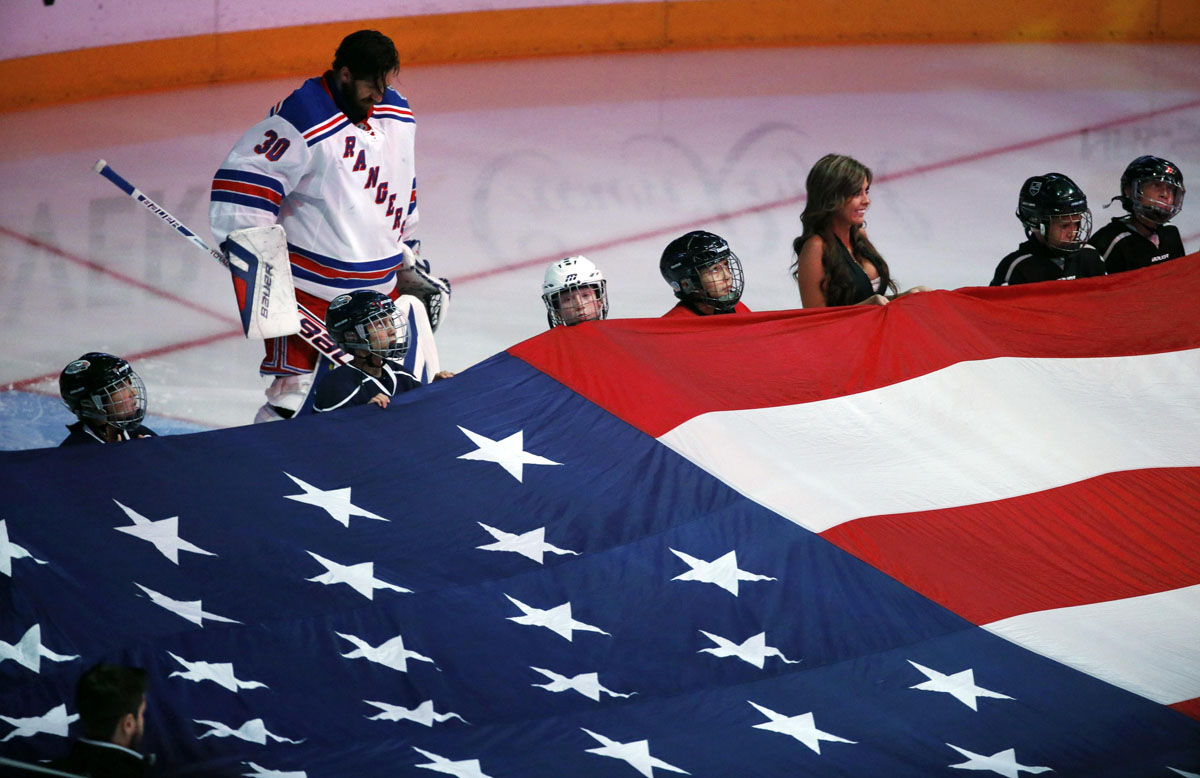 It is that time of year again. The time of year where every Red, White, and Blue blooded American gets together with family, friends, and neighbors and celebrates the Independence of the United States of America by drinking beer, watching baseball, swimming, and shooting off fireworks. While hockey may not be the first thing you associate America with, there is no doubt that some of the greatest moments in American sports history have come from hockey. In celebration of Independence Day, here are my Top Five goals by American Hockey Players, with only a slight bias towards the Rangers.

In 2015, the Rangers headed into the playoffs at the top of the league. Fresh off of a President’s Trophy and a first-round victory over the Penguins, the Rangers faced a second-round matchup against the Washington Capitals. However, the Rangers learned quickly that the Capitals would not go easily. The Blueshirts went down 3-1 in the series and trailed 1-0 in the waning moments of game five until a group of Americans led by Chris Kreider decided the Rangers were not going to go down without a fight.  Kreider scored to tie the game, and then provided a lunar eclipse in front of Braden Holtby as Ryan McDonagh (American), off an assist from Derek Stepan (American), blasted a shot home to keep the Rangers alive.

In game six, the Rangers came out strong with Kreider scoring two first-period goals to give the Rangers a lead they would not give up. In game seven, the Rangers and Capitals went to double overtime tied at one on a goal by Kevin Hayes from JT Miller and Ryan McDonagh, all Americans. In the overtime period, Derek Stepan scored one of, if not the greatest, goals in recent Rangers history.

In 1994, the New York Rangers won the President’s Trophy and steamrolled through the first two rounds of the playoffs before beating the Devils in an epic seven-game series highlighted by “The Guarantee” and “Matteau, Matteau, Matteau!” The Rangers seemed poised to end their 54-year Stanley Cup drought and took a 3-1 series lead before the Canucks would force a game seven at the Garden. Rangers fans were extremely nervous and for good reason. Year after year the Rangers fell short of the ultimate goal of the Stanley Cup. After seeing the Canucks force a game seven, it seemed like the curse was about to strike again. But early in the first period, Brian Leetch, the eventual Conn Smythe winner, scored the opening goal and the Garden exploded as the Rangers went up 1-0 and did not trail the rest of the way en-route to their first Stanley Cup in 54 years.

Sorry Sabres’ fans. I’m sure this one will sting until Eichel, Dahlin, and company lead you back to the promised land. In 1999, the Dallas Stars and Buffalo Sabres met in the Stanley Cup Finals. In a series that featured many future Hall of Famers, two Americans teamed up for one of the most memorable goals in Stanley Cup history. With the Stars leading the series 3-2, game six went to overtime with both teams knotted at one. With 5:10 left in the first overtime period, the Stars cycled the puck around the Sabres zone and threw the puck on net where Mike Modano knocked the puck off of Dominik Hasek and Brett Hull slammed home the rebound to give the Dallas Stars their first Stanley Cup Championship. And although the goal was controversial, there is no arguing the fact that the goal was one of the greatest goals ever scored by an American hockey player.

Just this past year, the United States Women’s Hockey Team took home the Gold Medal in the Olympics for the first time in 20 years. While the US women have won on other international stages during those twenty years, the Canadians owned the Olympics, including the 2014 Sochi Olympics where the Canadians beat the Americans in overtime. However, in 2018, the script was flipped. Late in the first period, the Americans opened the scoring on a snipe from the top of the left circle. However, Canada came back quickly and tied it just two minutes into the second period. Five minutes later, Canada took a 2-1 lead and held that lead until late in the third period. With just over six minutes left in regulation, Monique Lamoureux, Jocelyn’s twin sister, scored on a breakaway to tie the game at two. The game stayed tied through overtime and five rounds of the deciding shootout. In round six, Jocelyn Lamoureaux scored one of the nastiest shootout goals you will ever see to give the US the game-winning goal and the gold.

Was there any doubt this goal would make the list? I don’t believe that there will ever be a greater American hockey goal. Take away all the politics, theatrics, and build up, and you still get one of the greatest underdog stories of all time. Add in the Cold War and the political climate of the time, the 10-3 loss at MSG just before Lake Placid, twenty years of Soviet domination on the ice and Eruzione’s celebration and you get the greatest American hockey goal of all time. There is no debate.

After winning the Olympic Gold in 1960, the Americans did not win another gold until the Miracle on Ice. In addition, the Soviets won four straight gold medals and had not lost an Olympic hockey game since 1968. The Americans were not supposed to be competitive entering the tournament, and the 10-3 loss at the hands of the Soviets just a few weeks prior confirmed that sentiment. However, Herb Brooks’ college kids did not back down and engineered one of the greatest sports moments in American history. Tied at three in the third period, Mike Eruzione gathered a loose puck at the top of the zone, walked into the high slot and wristed a shot past Vladimir Myshkin giving the Americans a 4-3 lead. As we well know, the Americans closed out the Soviets and went on to beat Finland in the gold medal game, securing their first gold medal in twenty years.

While hockey may never be as popular as the other three major sports in America, there is no doubt that American hockey has given us some of the greatest sporting moments in our history.