The New York Rangers are back to full health as both Vitali Kravtsov and Ryan Carpenter were regular participants at practice at the MSG Training Facility. Head coach Gerard Gallant said both player have been cleared by the medical staff.

Kravtsov skated on the first line left wing in place of Chris Kreider, who was given a maintenance day. Ryan Carpenter centered the fourth line with wingers Jimmy Vesey, Dryden Hunt, and Ryan Reaves all rotating.

It’s expected that one of those wingers will be scratched for Thursday’s contest against the San Jose Sharks. In addition, it’s unlikely Kravtsov will be in the lineup considering there’s currently no opening on the top three lines.

Jacob Trouba, who took a slap shot off the helmet from Troy Terry in the team’s 6-4 victory over the Ducks on Monday night, was also given a maintenance day.

The Rangers may also want to consider which forward they want to send down to the Wolf Pack in order to increase their cap space, which is prorated come the NHL Trade Deadline. Their current amount is just $184K.

Basically, $1M in cap space at the deadline will allow you to add around $4.5M in salary.

Vitali Kravtsov and Ryan Carpenter back at practice

On the play, Kravtsov was off-balance near the boards when Hedman put his knee into his chest and proceeded to shove his head down.

The former 9th overall pick in the 2018 NHL Draft is going to have to work his way through practice to get back into the lineup. Alexis Lafrenière, who has taken his spot as the second-line right wing is playing well with 1 goal and 3 points in 4 games this season.

Carpenter, 31, was injured in the 4-1 loss to the Winnipeg Jets last Friday night.

Late in the second period, while on an aggressive forecheck in the Jets zone, Carpenter tried to get around the defender to steal the puck. In the attempt, both players went down and Carpenter fell face first on the Jets player’s skate causing a deep laceration. He left for the locker-room bleeding badly and didn’t return for the third period.

“I just wanted to say thank you to everyone who has reached out,” Carpenter said afterwards. “I’m very grateful it wasn’t worse. I am fine and all stitched up.”

Carpenter signed a one-year contract this summer with the Blueshirts for $750,000. In three games this season, he has one assist and -1 rating.

Last season, he scored 12 points in 67 games split between the Chicago Blackhawks (59) and Calgary Flames (8). For his career, he’s amassed 70 points in 311 games with San Jose, Vegas, Chicago, Calgary and New York. 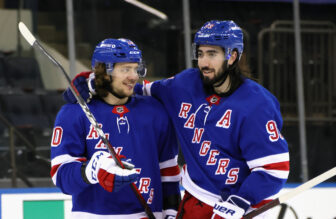