Wayne Gretzky pays respects to Islanders great Mike Bossy, who passed away at 65

Mike Bossy is one of the all-time greats, and if any fanbase knows it better than the Islanders’ fans it’s the Rangers and Wayne Gretzky.

News was relayed by reporter Renaud Lavoie that Bossy, who has been battling lung cancer since October has passed away at 65.

“It’s with deep sadness that I just learned the passing of Mike Bossy,” he said. “Sending my sincere Condolences to the family.”

Although the Islanders are bitter rivals, the respect that Bossy earned from the Rangers and their fans is deserving. Same for Clark Gillies, who passed away in January. Both players were at the heart of the Islanders dynasty that won four straight Cups, and genuinely made life miserable for the Rangers for so many years.

In the heat of battle, it is hard to sometimes admire the greatness of your opponents, especially when you are on the wrong side of the stick so often. That was the case with the Islanders and the Rangers for years.

Far too often it was Bossy scoring big and timely goals to oust the Rangers and his Islanders would march on to win the Stanley Cup four times (1980, 81, 82, 83).

“I can tell you that I intend to fight with the determination and the enthusiasm that you have seen me display on the ice and in my game,” Bossy wrote to fans in October. “That same determination that helped me achieve my dreams and my goals, the one that propelled me to the top of my sport, when I still put on my skates.”

Unfortunately, this was a fight he could not win but his heart is legendary and if anyone knows that it is Wayne Gretzky. His Oilers battled the Islanders and had to suffer Stanley Cup defeat before realizing glory.

The former New York Rangers star was on SiriusXM’s NHL Morning Skate to talk about Bossy on Friday morning.

“It’s a sad day,” Gretzky said. “He’s a real special man that just happens to be one of the greatest goal scorers. He’s a champion and a great person.

“In our era if you looked at the opposition during warmup it was a sign of weakness. We played them several times during a four year period and it was heated, including two Stanley Cup finals. We got them at the right time because it was their fifth straight appearance.”

Gretzky also recalled that when they broke into the NHL it was a rough and tumble time where brawls would break out often. That just made it harder for players like him and Bossy.

“He took a beating to score goals, which consequently led him to retire because his back to a beating,” said The Great One. “If he got the puck in a certain area you might as well go to center ice because he didn’t miss the net.

“He has to go down as one of the greatest goal scorers ever.”

Mike Bossy was an amazing player

It’s hard to understand just how incredible of a player Bossy was by watching old highlight reels. I for one was not particularly old enough to fully appreciate his greatness, but learned to later on.

When Teemu Selanne set the record for most goals by a rookie in the NHL during the 1992-93 season, a VHS tape was produced called ‘The New Boss’. (Look it up kids…it was a big and clunky cassette that went into an even big machine. Plus if you watched it too many times the picture would deteriorate.)

Boss was the nickname of Mike Bossy, who scored 53 goals in his rookie season of 1977-78. His record stood for 15 years.

A chronic back injury forced Bossy to retire following the 1986-87 season. He was inducted into the Hockey Hall of Fame in 1991.

An amazing player. Rest in Peace. 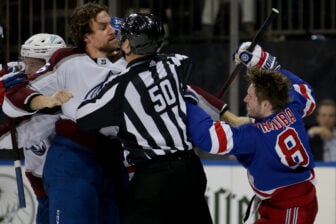