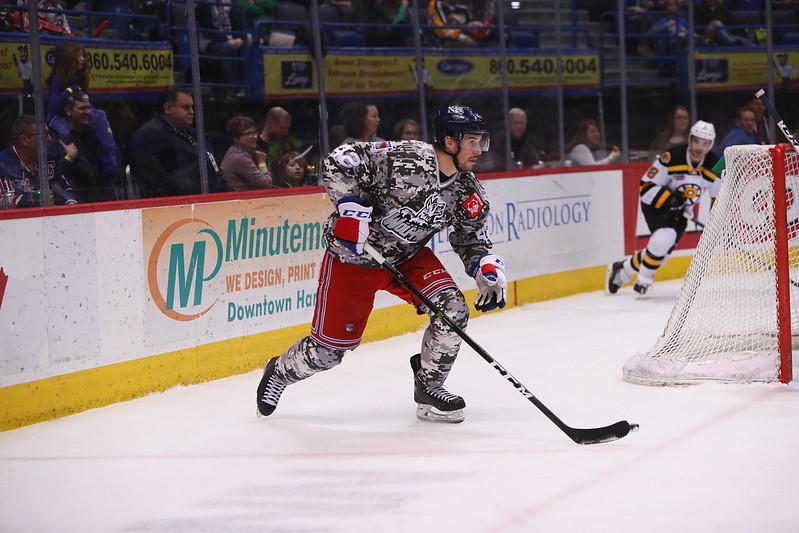 Last weekend was make or break for the Wolf Pack. Coming into both contests against the Charlotte Checkers, Hartford had lost their previous four contests. And after dropping the final two games in the season series with Charlotte, Hartford finds themselves out of the playoffs. While they are still technically in the hunt for the postseason, Hartford is 13 points out with 13 games remaining. The club is below .500 once again with a record of 26-29-5-3 for 60 points, and are in the seventh position in the Atlantic Division.

The veteran defenseman could be playing better in Hartford. He is still making the same mistakes on the blue line or in the defensive areas of the game, while offensively, he has contributed two points in 11 games. His production could be better as well, but his play style is geared toward being a defensive defenseman. There has been some progress since joining the club; becoming a leader in moments. For instance, during a timeout, he was talking to the defense corpse and explaining what to do to settle down a game which they eventually lost. Brendan Smith needs to work harder if he wants to return to New York next season.

Hartford enters the weekend on a six-game losing skid, and have won only two of their last ten contests. The club is struggling at the wrong time of the season where every point matters. The combination of call-ups, defensive struggles, and weak goaltending have killed the club. Keith McCambridge had a tough job during the transition of multiple players in and out of his team. The defense fell apart due to new players having to adapt to a new system. Most of the current defensive core is new and was unable to fit in and contribute. They had to learn what Keith McCambridge wanted and there was lack of communication in moments of games. Hartford was giving up plenty of opportunities, which came back to bite them.

The weak goalie duo also did not help. Chris Nell was struggling in net and was unable to do much. Brandon Halverson was in a similar situation and was reassigned to Greenville, causing the Pack to add goalies through professional tryout agreements, that did not work out either. Chris Drury examined his options and had limited ability to modify the roster for the better.

The first team to clinch a post-season spot is the Toronto Marlies. They clinched their spot last weekend with an impressive record of 42-16-1-1 for 86 points in the North Division. The Syracuse Crunch would be the next team to clinch depending on the outcomes of the upcoming weekend.

If the Wolf Pack want to sneak in, they will have to win out and also hope the Charlotte Checkers and Bridgeport Sound Tigers go on a losing skid. That is the only way Hartford can make the playoffs.

You can check out the primer here.