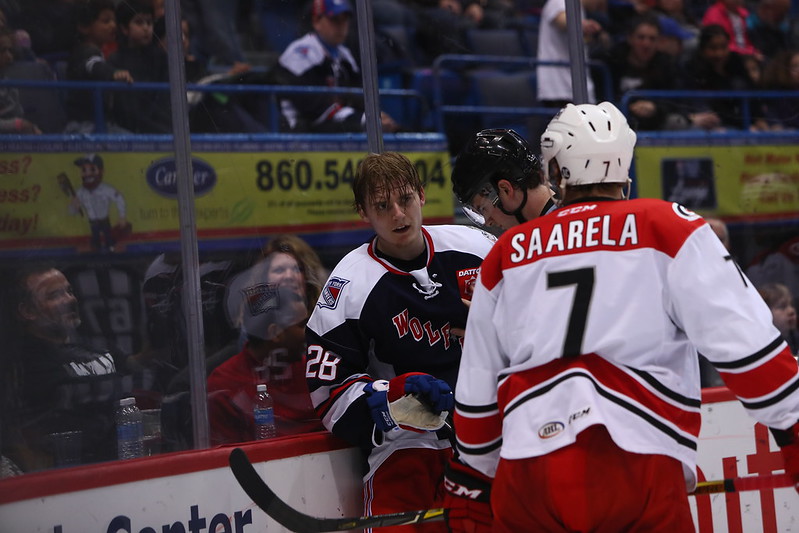 Hartford skated into the All-Star break with a five-game winning streak. The group found their magic touch and continued to climb the standings. Last weekend was a thriller, with the Wolf Pack sweeping a two-game series against Charlotte, as well as defeating the Utica Comets. Four of the wins were in overtime while the lone regulation win was the last game on Saturday against Charlotte.The offense it buzzing again and the defense seems to have found their game. Entering the first week of February, Hartford is sixth in their division at 46 points. They are .500 with a record of 20-20-3-3.  The record can improve, especially when you consider that Hartford is not far off with the other top dogs.

February Make or Break the Season?

To put the standings into perspective, Hartford is sixth in the Atlantic Division. The fifth-place Sound Tigers are tied with fourth place Charlotte for the last playoff spot. Since the league goes by point percentage, both clubs are .568 (technically 50 points), with Charlotte owning the tie-breaker. Hartford is four points behind and did themselves a favor last weekend with sweeping the Checkers in both games. Hartford will face Bridgeport next week and then play Charlotte twice the following week and then face Bridgeport once again.

This is perfect timing due to the standings race. If Hartford wants to get ahead of Charlotte and/or Bridgeport, they have to beat both clubs. Those games will not be easy and the Pack are getting hot at the right time. However, if the Pack begin to struggle in the month of February, the opposite will happen. The club would lose ground quickly in the standings, showing just how critical each game against both clubs will be. Hartford gets a crack at both clubs twice in the month of February. A majority of their games will also be on the road, so it is essential for the group to bond well and get comfortable away from XL Center.

Since Marek Mazanec is injured, young prospect Alexandar Georgiev is beginning to play frequently. The goalie has stepped up his game, having pitched two shutouts within a week, against Wilkes-Barre/Scranton on January 21st (1-0) and Charlotte on January 27th (4-0). Alexandar Georgiev found his touch in net. Previously, the goalie struggled in moments and was often caught on the losing end of games. He has turned it around and is pivotal to the success of Hartford while Marek Mazanec is out.

[WATCH ?] John Gilmour discusses what the biggest differences in his game have been between his first and second seasons with the Wolf Pack. pic.twitter.com/qFEoyoM0JJ

Joe Whitney has been in and out of the lineup this season. The veteran forward found himself out of the lineup for three games straight as a healthy scratch. This is also due to the veteran rule which the American Hockey league created. The team has played well without him in the lineup as well. Joe Whitney has nine goals and ten assists for 19 points in 40 games. From a leadership standpoint, he is the odd-man out. You wonder why the captain is out of the lineup, and with the deadline looming, the forward may be on the move.

Vinni Lettieri is a strong forward and I feel he did not get enough time with New York. On the plus side, he will help Hartford for their playoff push. If the Rangers need another forward, he should be the next man up.

In addition, the Wolf Pack have sent down defenseman Sergey Zborovskiy to Greenville of the ECHL. That means Ryan Sproul is back from injury for Hartford.

At the All-Star festivities, John Gilmour surprised everyone with his speed. He won the Fastest Skater Event with a time of 13.663, putting him fourth all-time for the fastest skater in the American Hockey League.

John Gilmour has won the fastest skater event in the #AHLAllStar game!

He recorded the time of 13.663 seconds. This puts him on #AHL's list of fastest skaters all-time as the fourth fastest in league history. Congrats! #HWP #NYR pic.twitter.com/y3QLKx1EqU

Be on the lookout shortly for the announcement of the new Wolf Pack lease! According to this report from the CRDA, the new lease agreement for the Wolf Pack will be finalized and announced shortly. The deal is a five-year agreement, that will include protections for both parties when the XL Center is sold.

The CRDA will put the building for sale this spring and issue a Request For Proposal. The state agency is looking for a private company or person to buy the building and manage the facility. The XL Center needs renovation in order to maintain competitiveness in the market and update the building top to bottom. The facility is considered outdated and the price tag for a refurbishment is $250 million. In any case regarding the building being sold, the Wolf Pack should remain in Hartford.