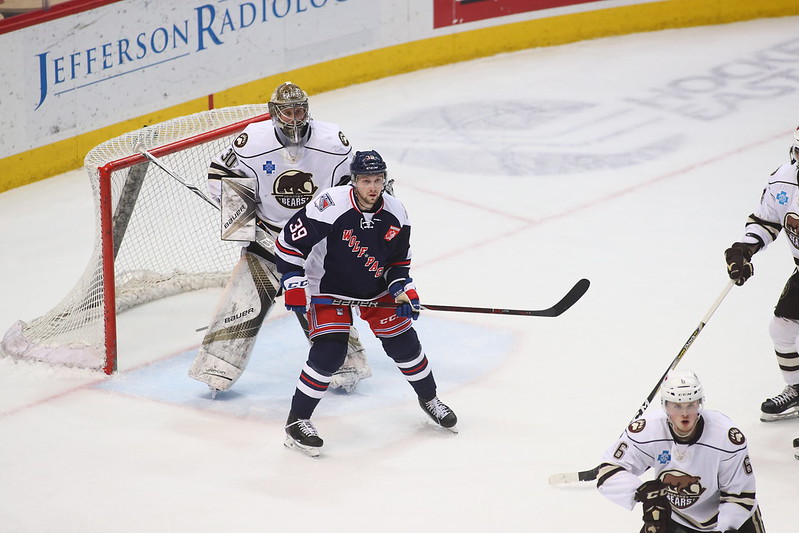 As we enter the second week of November, the Pack continue to struggle. This past weekend was a turning point for the club when they snapped a five-game losing streak on Saturday in the second of their back to back games against the Wilkes-Barre/Scranton Penguins. The club recorded three of a possible six points over the weekend. Sunday’s loss in Hershey was a toss up when the game went into a shootout. By then, the second point is decided by skill and luck. Hartford plays two games this weekend, entering the contests at 5-7-1-1 for 12 points, which puts them in 7th in the Atlantic Division.

The talented forward deserved the call up to the Rangers. He was producing nearly point per game and had recent dominant games.  The hard work paid off for the prospect.  He is able to set up plays well along with shooting well. Let’s check out some reaction action from him in Hartford.

Here’s a look at John Gilmour’s one timer goal. Good pass from Lias Andersson, & I like the positioning of the forward. He sets up Gilmour well. Good traffic in front of the crease as well. #NYR #HFDvsWBS pic.twitter.com/BAxqcNIHO1

In the two games against the Penguins, veteran Matt Beleskey attempted to spark the team in both contests. As Hartford was down on Friday, the forward tried to gain momentum for the club with a fight in hoping to turn the tables. At the time, the Pack was on a four game losing streak and was unable to get a lead all night. He can throw down!

On Saturday, he produced a few chances and tried to play physical in hopes of wearing down the Penguins. The Pack won the contest 3-2 to snap a five game losing streak.

Rangers prospect Patrik Virta departed his KHL club, HC Slovan, with a mutual termination of his contract. The prospect has the option to head in North America to play with the organization in Hartford. That would be a good option for the forward because he could adjust to the North American ice and the system in the organization. That would also mean another prospect would join the ranks in Hartford. Stay tuned for what he will do next.

Earlier in the week, defenseman Sean Day was assigned to the Maine Mariners of the ECHL. The defenseman struggled in his six games in Hartford. He was the weakest link on the blue line due to strong competition from the other players. Day is still adjusting to the professional life and the organization needs him to play continually to develop and grow as a player for the Rangers.

There is no reason to sound off any alarm yet in Hartford. The Atlantic Division is still a tight race early in the season. A winning streak could boost the Pack up to the upper or middle portion of the standings depending on what other teams do. Only a few points separate the Pack from second place.

The Providence Bruins are last in the division with seven points. The Pack built themselves space between the club. The Springfield Thunderbirds are in second with 16 points. Hartford and Springfield are separated by just four points. The rest of the teams in front of Hartford, except for Charlotte, are ahead by one, two, or three points. The division is close entering the week.

The division leader is the Charlotte Checkers. They have 20 points with a record of 10-1. They have built themselves a gap from the rest of the teams fighting for positioning in the standings.

Hartford is playing six home games and two on the road for the rest of the month of November. The travel is going to be light as opposed to October. After Friday’s game against Utica, Hartford begins a five game home stand.