Zac Jones showed up to New York Rangers rookie camp not because he had to, but because he wanted to be there.

“They gave me the option and I said I wanted to come,” Jones told reporters on Wednesday. “I take it as an advantage for me. Going into camp and having these couple of days of practice is going to help get my legs under me. I thought it it really helped me coming into camp last year, so I wanted to be here.”

This is a big opportunity for Jones, who plays left defense, to earn a spot alongside Braden Schneider on the third pairing. He’s entering the final year of his entry-level contract and it would benefit both sides if the 21 year-old can make the team.

Zac Jones bulked up for the opportunity

Last season, Jones battled Nils Lundkvist at camp tooth and nail for the final spot on the roster. He likely lost out due to the fact the Rangers needed a right defenseman to play with veteran free agent signing Patrik Nemeth.

Fast forward one year later, Nemeth is gone and Lundkvist has asked for a trade after being supplanted by Schneider.

Opportunity is knocking for Jones and he’s been in New York for weeks in preparation for Rangers training camp on September 21.

Last season, Jones was eventually called up due to injuries for 12 games and notched 2 assists. For his brief NHL career, he’s played 22 games and recorded 6 helpers. He’s a smooth skater with a high hockeyIQ and makes a great outlet pass. However, the criticism on him is for being a little on the small side as a defenseman.

“I gained about 10 pounds. Last year, I was pretty light and I got pushed around a lot,” Jones admitted. “I took that into account this summer. I tried to work on my strength and got into the gym as much as possible.” 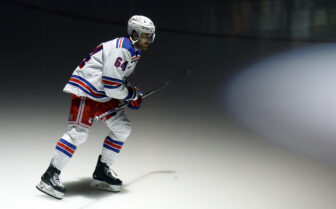 Jones credited his time in Hartford for really aiding in his development. In his first full season as a pro with the Wolf Pack, he was their leading scoring defenseman with 35 points in 52 games.

“I was really happy being in Hartford. I got to play a lot and learn the pro game,” he said. “It feels like the game is almost easier since I played last year. I’m coming to just play my game and not worry about it so much.”

The hope is for Jones to parlay his past experience and confidence into winning a spot on the roster. His stiffest competition will come in the form of fellow rookie Matthew Robertson and veteran Libor Hajek.

“I think that spot’s open and it’s going to be a healthy competition,” Jones explained. “Coming in last year I felt I had an opportunity to make the team, so it’s the same mindset and I’ll work my hardest.”

It’s early, but Jones seems to be well prepared to seize the opportunity in front of him. 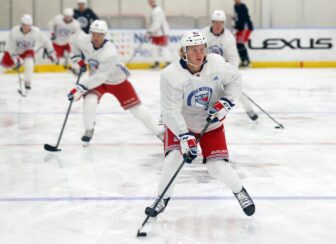 Also Read:
Centers at NY Rangers rookie camp must show what they can do
Share: