Zac Jones is currently in New York training with a small group of players in preparation for Rangers training camp in the coming weeks.

Jones, 21, has been patiently biding his time to be a regular for the New York Rangers defense. This is now his best opportunity, and it comes as he enters the final year of his entry-level deal. The Rangers, who will be up against the salary cap, could easily fit his $925,000 salary.

The Rangers have a huge opening on left defense now that they’ve traded Patrik Nemeth this past summer.

At camp, Jones will likely be competing with Matthew Robertson for the final starting spot to play the left side with Braden Schneider. They both will have less competition with the news that highly touted prospect blue-liner Nils Lundkvist has requested a trade.

In speaking with Jones’ agent, I asked if his client may have also felt the need to try and find a better opportunity elsewhere.

“We have never requested a trade with the New York Rangers,” Hunwick stated. He also added that Jones is excited about playing with this group of players.

“We know what Jonesy is,” Gallant said. ”He moves the puck real well. We like what he brings and I like the way he carries himself on the ice. He’s not a big guy but he defends pretty hard.”

Jones has already shown flashes he can play in the NHL because of his high hockey IQ. His ability to read plays quickly more than compensates for his size at 5-11, 185lbs frame.

In his first full season as a pro with the Hartford Wolf Pack, he was their leading scoring defenseman with 35 points in 52 games.

“Jones can create offensive with his passing and his mobility on the blue-line beating a guy one on one,” said Wolf Pack coach Kris Knoblauch.

A Jones and Schneider pairing

The Rangers called up Braden Schneider in January wanting a to get a brief look at their 2020 first round pick. Instead, they received a whole lot more. Known for being a physical defenseman that can make a good breakout pass, he scored a goal in his first game. Playing like a seasoned veteran made it very difficult to take him out of the lineup from that point on.

After playing every game of this past playoff run and picking up three assists, Schneider is locked in as the third pair right-defenseman for next year. He should also get more opportunities to kill penalties but who will his partner be?

A Jones-Schneider pairing is the route the Rangers should take next season. They need to see what they have in Jones before they even consider trading him.

New York has Robertson still on his ELC until 2023-24, which will buy them time. Libor Hajek was also signed for one more year as insurance. The Rangers also have veteran defenseman Jarred Tinordi signed for one more season at $900,000. All are insurance options in case Jones can’t cut it.

“I believe 100% I’m a better player than I was at the end of training camp,” Jones said. “I’m going to keep getting better.” 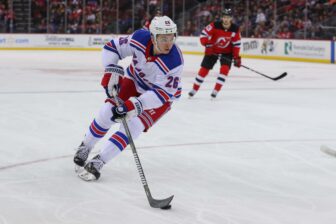