The preseason is still in its early stages, but defenseman Zac Jones is sending the New York Rangers a clear message.

Sending me down won’t be an easy decision.

Since Development Camp opened, the 20 year-old defenseman, who selected in the third round of the 2019 Draft has been stellar. The kid was excellent in the two rookie games against the Flyers. And in his first preseason contest, Jones picked up a beautiful assist on the power play in NY’s 3-2 win over Boston.

His final stat line was 1 assist, with a +1 rating and 3 shots on goal. Jones played on the PP and SH, finishing with 18:32 of ice time. Only Anthony Bitetto played less, but this kid should be getting more.

Jones is not a big physical defenseman, but his skating and puck moving ability make him standout. Furthermore, he has something very important going for him and that is high hockeyIQ.

So far, it’s hard to argue with Carvel’s assessment.

Jones knows making the Rangers this season won’t be easy

Jones joined the Rangers late last season and played in 10 games recording 4 assists. He certainly did not look out of place and was extremely poised.

Unfortunately for him, highly touted prospect Nils Lundkvist is finally here after being a force in Sweden’s top league. That prompted the Rangers to bring in veteran LD, Patrik Nemeth in to help mentor him and be his defensive partner.

With the Blueshirts top four already set in stone, that puts Jones on the outs. To his credit, he’s mature for his age and realized the road ahead won’t be easy.

“I’m coming in trying to make the team, I know it’s going to be difficult and I don’t have a spot,” Jones admitted. “If I get sent down to the AHL, it’s not going to be a big deal for me, I’m just going to work hard and get back to the NHL.”

Right now, although there isn’t much talk about it, he’s making that decision very hard for Gerard Gallant and Chris Drury. 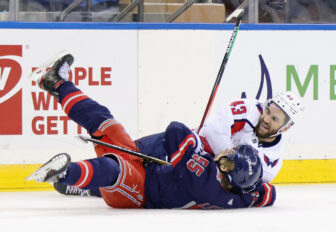