New York Rangers head coach Gerard Gallant appears to have four lines and two defensive units in place. The battle for the remaining roster spots is going to heat up with just four exhibitions games left before opening night.

After two preseason games played, one thing seems clear, the Blueshirts have their forward lines set. Also their goalies and two top defensive pairs are locked in. The fifth and sixth defenseman and the possibly two extra players are where there’s a little doubt.

Based on the lines that have played the past two preseason games, here’s what appears to be set:

The players left in training camp outside of the lineup above consist of 11 forwards and seven defensemen as of Wednesday afternoon.

The decision on the goalies is simple. Unless something out of left field occurs, Shesterkin and Georgiev are the two goalies.

As for the extra forward and three more defensemen, that gets a little complicated.

On the blueline, I think Patrik Nemeth will make the squad. I could see Nils Lundkvist as his partner to start the year. It’s beneficial to have a veteran on the ice with a rookie, especially on defense. This approach worked well last season when Trouba was partnered with Miller.

The seventh defenseman is the tougher one to predict. The team could go with Zac Jones, who played five games at the end of last season when the team was out of playoff contention. But it isn’t wise to develop a talent like his in the press box.

Anthony Bitetto is another option. He played in 14 games for the Blueshirts last season and has appeared in 197 NHL games over his seven years in the league. Then there’s Jarred Tinordi who was also signed this offseason. Both veterans would need to clear waivers in order to be sent down.

A final option would be Libor Hajek. The 23 year-old has appeared in 77 games with the Rangers over the last three seasons. He has been inconsistent at best during that time but has shown glimpses of being a full-time NHL defenseman.

There is one caveat with Hajek, can’t be sent down to the AHL without clearing waivers. Does this give him an edge over other potential defensemen? That depends on what the future outlook for Hajek is within the organization. 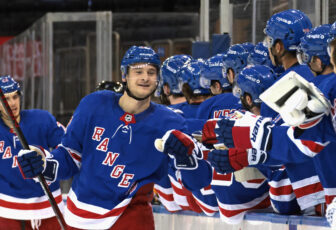 Also Read:
New York Rangers may need to make a trade or lose Hajek and Gauthier to waiver claims

Now for that hard part. Who will be the lucky 13?

This is a great problem to have with many players battling so hard to earn a roster spot. Morgan Barron, Dryden Hunt, and Lauri Pajuniemi all have a shot at making it. Tim Gettinger, Julien Gauthier, Gregg McKegg, and Will Cuylle are some familiar names that also could fill out the team but are unlikely. First-round pick Brennan Othman will not make this squad out of camp and is destined to go back to juniors.

Of this group, Dryden Hunt and Morgan Barron have the best chances to make the team.

One final possibility, with the team always looking for depth at center, McKegg could be considered. Over his eight seasons in the NHL, McKegg has a career 49.7 face-off win percentage. He played with the Blueshirts in 2019 -2020 appearing in 53 games, and played 5 games for Boston last season.

The next four games are going to answer many questions and will also be a lot of fun to watch.

The NHL Trade Bait Tracker for the 2021-22 season has been set. While training camps continue, a few names have emerged as possible trade deadline rentals already. Read More.