Report: Barclay Goodrow out for rest of Rangers series vs Penguins

The New York Rangers held an optional skate on Friday after thrilling 5-2 win over the Pittsburgh Penguins at Madison Square Garden.

They came into the game looking to even the series and down two key players. Defenseman Ryan Lindgren (lower-body) was a game-time decision but was scratched in favor of Justin Braun. And forward Barclay Goodrow (lower-body) was also scratched for Dryden Hunt.

The Goodrow news came as a surprise. In Game 1, he did not miss a shift and was on the ice just prior to Evgeni Malkin ending the contest in triple OT.

Barclay Goodrow likely out for the series

There’s no reason to speculate what caused the injury to Goodrow, especially since he did play the entire game on Tuesday.

The fact that it’s labeled week-to-week is indicative enough to the seriousness of the injury. Remember, Goodrow played with a broken hand in the Stanley Cup Final last season to give the Lightning their second straight championship.

When Gallant was asked if there was a chance that Goodrow could be available later in the series, he said it was unlikely.

Goodrow, 29, had a great first season with the Rangers after a trade and sign in the summer. In 79 games, he recorded 13 goals, 20 assists, for 33 points. All are career highs.

“He’s a big player and we’re going to miss him,” said Jacob Trouba. “We love the depth of our team. It’s not like he’s gone. He’s still around the rink– next guy up and hopefully he gets back as soon as he can.”

The next man up in this case was Dryden Hunt, who signed as a free agent this summer and played an excellent game as Goodrow’s fourth line replacement. In 10:28 of ice time, Hunt was physical registering 3 hits and was hard on the forecheck. He finished the game with an even rating.

Same can be said for Justin Braun, who was acquired at the trade deadline but used sparingly since. He picked up an assist in 17:44 of action, with 3 hits and 2 blocks partnering with Adam Fox.

Braun was in for Ryan Lindgren (lower-body). Fox’s regular partner is considered a game-time decision for Game 3, Saturday night in Pittsburgh.

As for Tyler Motte, Gallant said there’s a change for him to return in this series. Which would be help with the loss of Goodrow.

Motte, 27, was another trade deadline acquisition that was primarily brought in to add speed and relentless forechecking to the fourth line. His ability to kill penalties was an added bonus.

On the Penguins front, Casey DeSmith had core muscle surgery and is out for the season. If Tristan Jarry can’t return it will be Louis Domingue the rest of the way. 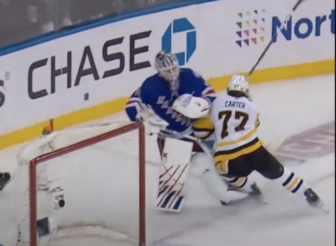