The New York Rangers came a way with a solid 5-2 victory at Madison Square Garden to even the series with the Pittsburgh Penguins at one game apiece.

Of course, this wouldn’t be a series involving the Penguins if it wasn’t for a controversial play.

In Game 1, a goal by Filip Chytil that would’ve given the Rangers a lead with three minutes remaining was disallowed after video review determined that Kaapo Kakko interfered with the goalie. Despite multiple video angles clearing showing Kakko changing the angle of his skate and being pushed from behind by Brian Dumoulin the call went the Penguins way.

By the way, Wayne Gretzky on the TNT Broadcast said that was a goal.

TNT blames Shesterkin for getting run over

Last night’s game was winding down when Jeff Carter ran Igor Shesterkin with 2:04 left. After playing the puck behind to Fox, Shesterkin tried to get back to the crease when he was hit and sent to the ice in some pain.

He was able to complete the game and told reporters he felt fine after the game.

Let’s get this straight, per the NHL rulebook, a goalie is not fair game when they leave the crease. That appears to be something Eddie Olcyzck, a former Ranger and now TNT broadcaster seems to have forgotten.

“Watch Shesterkin! He’s coming out and sees Carter and lifts that skate up,” he said. “To me Shesterkin is the one that initiated the contact.”

Oh Eddie! What are you saying?

Regardless if Igor raised his left leg a whole inch off the ice, Jeff Carter clearly knows where the goalie is and makes zero effort to change his direction. Matter of fact I will double down, it looks to me on one replay angle that Carter lowers his shoulder in order to maximize contact.

“I’m not happy obviously. In a game like that there is no reason for it,” Gerard Gallant said. “Carter is a good honest player but it didn’t look good to me.” 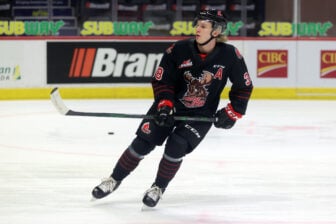 Combined with his 79 save performance in Game 1, Shesterkin has made 118 saves in his first two playoff contests which is second most in league history behind Columbus’ Joonas Korpisalo’s 121 saves set in 2020. He is tied with Curtis Joseph, who did it with the Blues in 1993.

According to NHLStats, he also became the first goaltender since 1955-56 to register 100 saves in his team’s first two playoff games, The previous mark being to both Anaheims Jean-Sebastien Giguere (2003) and Vancouver’s Roberto Luongo (2007).

The scene now shifts to Pittsburgh for Game 3 on Saturday.

The New York Rangers, Florida Panthers, and Dallas Stars all evened their series. Plus the Colorado Avalanche win in OT to take a 2-0 series lead. Check it all out at The Daily Goal Horn. Read More.