Jacob Trouba is a throwback hard-hitting defenseman that would be lauded back in the 90’s for his ability to throw clean open ice hits.

Back in those days, Scott Stevens was considered the premier defenseman when it came to delivering such hits. That being said, Stevens was also known for targeting player’s heads. Of course, this is also the era where the prevailing mindset was the recipient of the hit should’ve kept their head up.

Stevens ruined the careers of star players like Eric Lindros and Paul Kariya with such bombastic blasts. Shockingly, but not surprising for the way the game was called in those days, Stevens was only suspended twice in a long career that spanned 1635 games.

Meanwhile, considering how much tighter the game is called today, especially when it comes to headshots, Trouba has been suspended just once in 623 contests. It came in 2017 when he made head contact with then Ottawa Senators forward Mark Stone and received two games.

“That guy is known for hitting high, not really worrying about the puck out there and almost trying to hurt people,” Athanasiou said. “That’s his game; that’s what he does. He’s an $8 million man with zero goals, so he has to figure out how to do something when making that much. If you can’t help the team, I guess you try to hurt guys on the other team.”

That hit occurred with just under three minutes remaining the second period of the Hawks 5-2 win on Saturday. On the replay, Athanasiou is starting to break the puck out of the zone with his head down. Trouba, who is already in the process of squaring up the hit when the puck skids away from the Hawks player, goes in shoulder to chest.

Despite Athanasiou’s claims and some critics saying Trouba left his feet (which he did not upon contact), no penalty was called for the hit. He did receive a misconduct for his second fighting major in the game. Both times, Trouba was challenged because of a clean check.

The NHL Department of Player Safety also deemed the hit clean and no hearing was required.

The New York Rangers captain is indeed paid handsomely at $8 million per season.

Trouba, 28, only has six assists in 26 games but gets very little power play time which impacts his numbers. That being said, the Rangers didn’t sign him to post Adam Fox type stats. His acquisition was to bring in a big bodied, hard-hitting defender that can clear the front of the net and provide leadership.

Has he struggled defensively? Yes, but so has the team as a whole.

That being said, Trouba is the Rangers leader in hits with 88 despite playing through some nagging injuries.

For all this latest hoopla, Trouba isn’t a stranger to opposition players and fanbases complaining about his hits.

In the playoffs last season, incidental contact with Sidney Crosby led to the Penguins star knocked him out for games 5 and 6. Pittsburgh was up 3 games to 1 in the series and watched the Rangers rally in 7 after that so called hit.

No penalty was called on the play and no hearing was held either.

“It’s a fast paced game. It’s how I was taught how to hit,” Trouba said last season. “I don’t have a reputation as a dirty hitter. I play the game hard and play it close to the edge but I try not to go over the edge.” 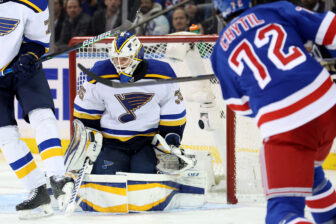 Also Read:
Rangers search for answers and a win against visiting Blues