Blueshirts at The Worlds

The 2017 IIHF World Championships have come to a close with Sweden ultimately taking the gold in an absolute nail-biter over Canada. It’s not a stretch to say that the World Championships play second fiddle to the Stanley Cup playoffs each spring but with the Rangers getting eliminated earlier than expected this year it gave fans some incentive to watch since four them joined their national teams. Kevin Hayes, Brady Skjei, Oscar Lindberg and last but certainly not least Henrik Lundqvist all participated with two not earning a medal and two taking home the gold.

The Americans! After a, let’s face it, lackluster showing during the playoffs this season, Kevin Hayes seemed to just elevate his play during the World Championships this year. His performance made many of us Rangers fans frustrated, due to the fact that that version of Kevin Hayes would’ve been nice to see during the playoff run. Oh and playing with one of the best wingers in the league, Johnny Gaudreau, helps as well. Gaudreau and Hayes had quite the chemistry during their Boston College days, and it showed at the Worlds with both of them looking extremely comfortable playing together.

Hayes played three games for team USA and scored four points on two goals and two assists. He looked like a much better player at the worlds than he did with the Rangers at the end of the playoffs so let’s hope Hayes can bring that kind of fire next season. 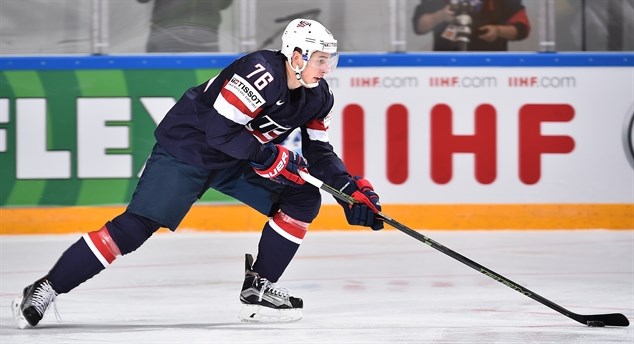 Skjei is currently the second best defenseman on the New York Rangers and the experience he gained playing at the World Championships will only help him grow even more. Skjei had the opportunity to join a blueline that was filled with talented skaters including Noah Hanifin of the Carolina Hurricanes, Charlie McAvoy of the Boston Bruins, Jacob Trouba of the Winnipeg Jets and Danny DeKeyser of the Detroit Red Wings. Skill helps skill and Skjei will only improve his play playing with talented players.

In three games played, Skjei recorded one assist. With such a small sample size to work with, it’s such a shame we didn’t get to see Skjei play more with team USA. He is an exciting young player and he will only get better as the years go on for the Rangers. Is he a staple for the national team yet? There’s a lot of competition to go around but if Skjei can progress and if he made a good impression on the higher-ups at this current World Championship, he may be playing alongside “Mac” before we know it.

The Swedes! Lindberg and Lundqvist went all the way at the World Championships playing five games each with Lindberg earning two assists. The play of Lundqvist specifically was one of the big reasons the Swedes won the gold medal. Lundqvist finished the tournament with a sterling .946 save percentage and 1.31 goals against average. He also stopped 42 of 43 shots to clinch the gold medal game for the Swedes. Those are vintage numbers for the King and it’s yet another reminder that he hasn’t lost a step. These World Championships were also a look at exactly what Lundqvist can do with an elite team in front of him: he can take them the distance.

To take a step away from the stats for a minute: this was a special tournament for both players for the emotional reason as well. Lindberg is only 25 years old and has already helped bring his country two gold medals. In Lundqvist’s case, he has now won gold in both the Olympics and World Championships and he finally got to play on the same team as his brother Joel again. It’s been 12 years since the Lundqvist brothers shared the same ice and you can bet that this victory will be one he cherishes for a long time. Oh and we got one of the best hockey pictures ever at the very end of the tournament courtesy of Lundqvist and Toronto Maple Leafs forward William Nylander: