Exclusive: Brennan Othmann talks with us about his journey to play for the New York Rangers 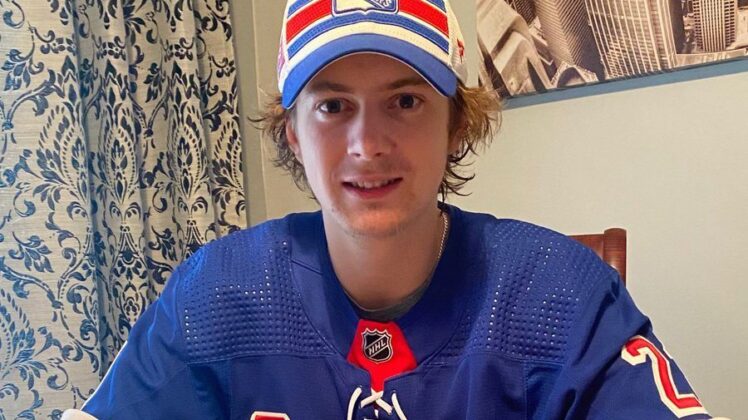 The 2021 NHL Entry Draft saw the New York Rangers make a selection outside of the top10 for the first time since 2016. This was also Chris Drury’s first draft as the new president and general manager taking over just months after the prior regime was dismissed.

Despite the clamoring for a center, he had a target in mind and it’s turning out to be a great move.

Brennan Othmann, who was 18 at the time became Drury’s first draft ever selection and the winger is ready to show everyone what he can do.

Brennan was born on January 5, 2003 in Scarborough, ON to Gery and Paige Othmann. His father played hockey in Switzerland and has Swiss roots, which we will get back to later.

Before Othmann got to the OHL, he played for the Don Mills Flyers in the Greater Toronto Hockey League where he was on a line with this year’s fourth overall selection Shane Wright.

“I played center as a kid but when Shane (Wright) joined the team, I was moved to the wing but I didn’t mind,” Othmann recalls. “Playing with him was great.”

He put up 64 points in 33 games for Don Mills which led to the Flint Firebirds drafting him 2nd overall in the 2019 OHL Priority selection. His good buddy, Wright was taken before after being granted exceptional status as 15 year-old.

In his first OHL season, Othmann had 33 points in 55 games earning him an invite to the World Hockey Challenge where he registered 6 points in 5 games for Canada. All seemed to go well, and Othmann was hoping to make a big jump in his second OHL season but the pandemic ruined those plans.

In an unprecedented turn of events, the OHL cancelled its entire season and it left hundreds of players in limbo for months. Luckily for Othmann, there was an alternative. While Will Cuylle was granted permission to go to the AHL that season, Othmann chose a path not often taken by players his age as he headed overseas.

The Swiss League (2nd tier of professional hockey in Switzerland) isn’t known for its development of North American prospects. Prior to Othmann joining EHC Olten, only two players from North America played in that league in their draft year. Former Rangers prospect Christian Dubé in 1994-95 and Mathieu Magnenat in 2010-11.

Othmann received some criticism for his decision for going overseas. However, Othmann views it as a great experience.

“I think playing over there definitely helped me a lot. You’re playing against men that are the same age as guys playing in the NHL. Some guys were even 20 years older than I am. Our assistant captain, who was 38, he was a great guy and a great leader. I learned a lot of leadership skills. I learned a lot of different kind of mental things you work on off the ice to stay dialed in on the game. That helped me a lot this year in Flint, for sure.”

He had a good foundation in Switzerland to fall back on. He had a billet family that looked after him, and his uncle Robert Othmann, who coaches in Switzerland, lived just 30 minutes away. The only real challenge Othmann faced was the 6 hour time difference between Switzerland and Ontario which made it difficult to stay in touch with his friends and family back home. But on the ice, Othmann was doing well. He posted16 points in 34 games, which may not seem like a lot but is solid when you break it down.

Othmann started out with 15 points in 17 games, before going cold with no points in 13 contests. But his team was on an 0-4-9 slide including an 8 game losing streak in those 13 games. Once the team recovered, Othmann’s production picked up again with 3 points in his final 8 contests.

I don’t expect a 17-year old draft eligible kid to carry a pro team when they hit a cold streak. However, these numbers indicate that Othmann was playing well. It’s even more notable when you consider the team struggled as a whole. For Drury, that was enough to use his 1st round pick to select the kid and add him to the prospect pool.

At the end of the season, Othmann received a call up for the u18 WJC and played for Team Canada. In the tournament, he scored 3 goals and added 3 assists for 6 points in 7 games en route to a gold medal and a championship ring.

Othmann on the draft and playing at Madison Square Garden

Back in Canada, Othmann and his family then prepared for the NHL Draft. Due to the pandemic, the draft was virtual like the year prior, giving Othmann the chance to watch it at home with his family.

In the time leading up to the draft the New York Rangers had several calls with the Rangers.

“I had I had about three separate calls, and then one big zoom call at the end. That was really cool. I didn’t expect to be picked by them because I knew they picked wingers in the past few years.”

Going 16th overall, Othmann is the 9th first round pick in 5 drafts dating back to 2017. Those picks are as follows:

“After I got drafted, some of the fans were kind of negative towards me and they didn’t really know who I was. And no one really had that much confidence in me,” said Othmann about some reactions to the Rangers not drafting a center.

Othmann made it clear that he understood any negativity wasn’t really aimed at him personally, but due to the expectations of the Rangers needs for more centers in the prospect pipeline.

He joined the Rangers for prospect development camp last year and after spending two months with team made the cut to the big club’s training camp. Othmann even got to play a game at Madison Square Garden.

When the Rangers played the Boston Bruins in their second home game, Othmann was given his opportunity. On the 3rd line with Greg McKegg and Jonny Brodzinski, the then 18-year old winger stepped onto Garden ice for the very first time.

“I know it was preseason but you know what? My mom, my dad, my sister, all my family watching didn’t think it felt like a preseason game. You’re wearing an NHL uniform, you’re at Madison Square Garden, against the Bruins, on the bench with Panarin, Trouba, Reaves, Fox. That for me was just really cool and you are living the dream even though it’s only preseason.”

The Firebirds coming into the 2021-22 season weren’t expected to do much. Early on Othmann was a one-man show in a lot of games but that one year of professional hockey in Switzerland really shaped him as a player and as a person. That paid off when he was named team captain.

It was also a season that saw him go head-to-head with fellow Rangers-prospect Will Cuylle several times.

“I know how he plays. He knows how I play. So it’s a little bit of an advantage,” Othmann said. “I really like his game as he’s big, tough, strong and he can shoot the puck. So he’s he’s a great player. He’s going to have a good NHL career whenever he makes the NHL.”

The most memorable meeting between the two came on November 21st where they matched hat-tricks and then received penalties for roughing each other up.

One player Othmann brings up is his teammate and goalie Luke Cavallin who received an AHL-contract from the Toronto Marlies earlier this year.

Othmann is very adamant that he missed out on the player of the year award in the OHL. “Maybe I get in trouble for saying this stuff but I’ll take it. I strongly believe he was the best player in the OHL this year and kudos to him. I hope people realize how good he is”, Othmann states.

It’s an interesting dynamic because if there’s one team where players get bailed out by superb goaltending, it’s the New York Rangers.

Playing RW, comparables and the no 78

When asked who he compares himself to, Othmann mentions several players. Over the years, he has been compared to Gabriel Landeskog, but he himself sees himself of a mix between Winnipeg’s Kyle Connor and Calgary’s Matthew Tkachuk.

“Tkachuk is not afraid to mix it up, hits hard, and he can play any role. Connor has an unbelievable shot and hockey IQ. That’s how I like to play. Tkachuk’s grittiness and Connor’s skill.”

When Othmann explains it in such detail, it’s easy to see why Drury and the Rangers targeted him last year in the draft. He brings exactly what the Rangers are missing and he’s not just a left winger.

“I am just as comfortable on the right side and I used to play center back in day,” Othmann explains.

Finally, the story behind his number 78 because it’s a number you don’t see very often and he has used it throughout his career.

“My favorite player growing up was Sidney Crosby and he was born in 1987,” he revealed. “I was born January 5th but I thought no 15 looked terrible, so I decided to use Crosby’s number and swap it around, turning 87 into 78.”

I asked him why he didn’t just go with 51 instead, but with his best buddy Shane Wright also being born January 5th, he had that idea already so Othmann went a different route.

“Obviously, I didn’t think I’d play in the NHL last season, but this year I have a little bit more experience, and each year my expectations will go up,” he said with conviction. “I’m excited and I had a good year in the OHL. I am going to try everything I can to make the team this summer.”

PS: I want to thank Brennan Othmann for sitting down with me and giving me the opportunity to share this story with our readers.

Also Read:
New York Rangers may be forced to go free agent route for a center