Chris Kreider and Julien Gauthier were forced out of action in last night’s exciting New York Rangers 4-3 shootout win over the Minnesota Wild.

Early in the first period, Gauthier was sandwiched by former Ranger Ryan Reaves and Wild forward Brandon Duhaime leaving him in a heap on the ice. The Rangers announced his evening was over at the start of the second period with an upper-body injury. He played just 1:47 of total action.

New York took an even bigger blow when Chris Kreider had to leave the game in the third period. On the play, Marcus Foligno went shoulder-to-shoulder on Kreider as he was carrying the puck near the boards into the Wild zone. The Rangers leading goal scorer, who is tied with Mika Zibanejad at 19, was seen leaving the ice favoring his left arm.

After the game, head coach Gerard Gallant stated they have re-evaluations scheduled for this morning.

Gauthier, 25, has registered six goals and nine points in 31 games since being an early season call-up from the Hartford Wolf Pack. The big and fast forward has been impressive playing a pivotal role on the Rangers fourth line.

Kreider, 31, has collected 30 points in 42 matches after a big 2021-22 campaign where he notched 52 goals. He was replaced by Alexis Lafreniere in the third period. If Kreider should miss any time, it will be interesting to see if Gallant gives the 2020 first overall pick and extended look on the top line.

Sammy Blais, who was scratched in favor of Jonny Brodzinski last night is the likely candidate to get back in the lineup should either or both players miss any time.

Regarding any call-ups from the Wolf Pack, Gustav Rydahl is most assuredly going to get the nod.

The 28 year-old forward has registered 4 goals and 9 points in 25 AHL games. He also has a +1 rating as Hartford’s coach Kris Knoblauch has applauded his overall game this season.

However, if the Rangers need to call up another forward, it would be great to see Will Cuylle get a look with the big club.

The New York Rangers are scheduled to skate at the MSG Training Facility at 12:00 pm et today. An update on both Kreider and Gauthier should follow. 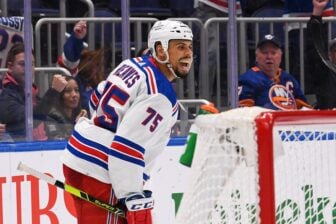