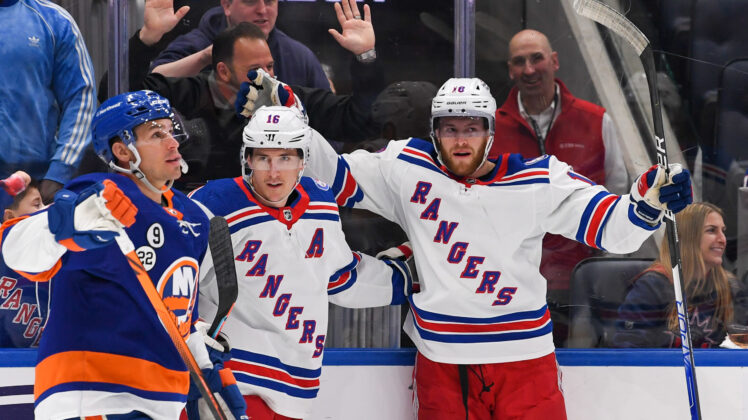 Andrew Copp left the New York Rangers win over the New York Islanders with what is being called a lower-body injury.

His last shift came around the six minute mark of the third period. Copp skated off with no discernible issues after being involved in several scrums along the boards battling for pucks. Aside from leaving early and the Rangers saying he was hurt, there’s been no further update.

The New York Rangers are scheduled to practice on Friday at 12 PM ET where we should hear from Gerard Gallant on his status. Additionally, Filip Chytil also left the game early for precautionary reasons.

Kaapo Kakko is not ready to return just yet per the head coach but expects him back for the playoffs, if not earlier. Should Copp not be able to go, Greg McKegg or Jonny Brodzinski would likely rejoin the lineup.

Copp, 27, has registered a point in 13 of the 15 games he’s played since being acquired by the Rangers at the deadline on March 21. After last night’s natural hat trick heroics he’s registered 8 goals and 10 assists for 18 points with the Blueshirts.

That brings his season totals to 53 points in 71 games for the pending UFA. All indications point to the Rangers at least trying to find a way to re-sign Copp to a multi-year deal. The Blueshirts are going to feel a cap crunch next season once Adam Fox’s $9.5M and Mika Zibanejad’s $8.5M extensions kick in.

The Rangers will have around $12 million to play with and could add around $2.5 million more if they can find a taker for Patrik Nemeth. New York will need to re-sign RFA Kaapo Kakko and then figure out what to do with Copp, Ryan Strome, Frank Vatrano, and Tyler Motte. All are UFA’s come July 13.

Last night was probably the best game of Copp’s brief Rangers career as he recorded a natural hat trick in the first period to lead the New York Rangers to a 6-3 victory over the New York Islanders at UBS Arena. Prior to the contest, Copp had no points against the Isles in 12 career games.

He opened the scoring 3:43 as he charged down the ice and accepted a backhand feed from Artemi Panarin. Coming in all alone through the slot he blasted a one-timer to beat Semyon Varlamov. It was also the 200th point of his career.

Copp scored his second goal off another Panarin feed, who finished the game with 4 assists. The shot came from a tough angle to the right of Varlamov. For Panarin, he is at 96 points which is a new career hight with 4 games left.

Copp completed the hat trick with 1:47 remaining in the first period by capping a give-and-go with center Ryan Strome.

“Kind of everything going your way,” Copp said. “Three passes only made by elite players and I was lucky enough to finish on them.”

When asked about what’s working so well for Copp and that line, Gerard Gallant provided some great insights.

“We talk about all the time getting the net drive going, people going to the net, and when (Copp) does that like he did tonight he gets an opportunity to get some great passes from great players,” Gallant said. “Sometimes we get too cute and we get fancy and we try those plays up high, but when we get people going to the net things open up. That’s what he does real well.”

The NHL had 11 games on the docket on Thursday. Over at The Daily Goal Horn you can stay on top of all the action, plus get an updated look at the playoff picture setting up in each Conference. Check it out here.