The New York Rangers have an excellent record of 19-7-4 for 42 points at the break. That places them third in the Metro Division and tied for third overall in the NHL standings.

Gerard Gallant has done a good job mixing in the new faces and identifying roles for players. When the team was struggling early on, he instilled enough confidence in the group to find ways to win.

Let’s look at five games so far this season that have defined the Blueshirts.

It was just the Rangers fourth game of the season and they entered the contest with a record of 1-1-1. However, it was Igor Shesterkin’s season defining game as he stole a win stoping 40 of 41 shots, including 8 against the Leafs amazing power play.

Artemi Panarin would score the team’s OT goal for the 2-1 victory.

“He was incredible tonight,” Gerard Gallant said. “He stole two points for us tonight.”

While the Rangers were still defining themselves under Gerard Gallant a dramatic comeback would highlight their resiliency. Down 2-0 on the road against the Ottawa Senators, the Blueshirts scored three times in a span of 3:20 late in the third.

Chris Kreider started the comeback with a PP goal. Ryan Lindgren would tie the game on a slam dunk in front, and Barclay Goodrow deflected in the eventual winner.

“After the second period, we knew we weren’t playing the best,” said Goodrow. “We knew that we were going to have to string together a good 20 (minutes) to even have a chance to tie it up or come out with the win, so I felt like we really put our work boots on in the third period.”

The Rangers at the time faced the undefeated Panthers at MSG after losing three in a row. Two games were blown third-period leads that turned into OT losses in Vancouver and Edmonton.

New York was outshot 45-18 but carried a 4-0 lead into the third period thanks to a power-play goal by Chris Kreider and a short-handed goal by Adam Fox in the first period and 4-on-4 goals by K’Andre Miller and Ryan Strome 30 seconds apart in the second. However, a late third-period surge by Florida almost cost them.

It was a big win over a team that dominated them last season. With that victory, the Rangers had 29 points (13-4-3) which was good for second overall in the NHL. They’ve stayed at the top of the league standings since.

“It’s a good feeling but it’s a group that’s not satisfied,” Strome said after the win. “The important thing for us is to continue to build. [Head coach Gerard Gallant] keeps up pretty honest, he pushed us at the end of the game on the bench. Night in and night out it’s going to take that the rest of the year.”

Shesterkin made 19 saves before he left with an injury. Georgiev came on to save all nine shots he faced to complete the combined shutout. Ryan Strome scored the game’s only goal as the team proved they could overcome in game adversity big-time.

“I think we’ve grown a lot in the last year or two and we’re able to handle these things no matter who goes down,” Strome said. “We’ve had a ton of games where we’ve played with 11 forwards because guys get hurt or whatever. I think guys responded well on the bench, just tightened up and made sure we helped him out.” 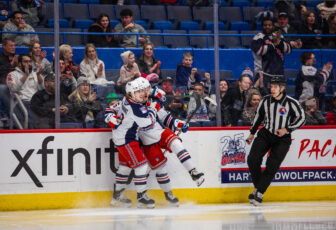