Gerard Gallant named a finalist for Jack Adams Award, can the Rangers coach win it?

The NHL announced Gerard Gallant as one of the finalists for the Jack Adams Award as Coach of the Year. Also named were Calgary’s Darryl Sutter and Florida’s Andrew Brunette.

Each year, the NHL Broadcasters Association votes on the head coach who has “contributed the most to his team’s success.”

This should be a tightly contested vote as all three candidates are worthy of winning the honor.

According to Vegas Insider, Darryl Sutter is a slim favorite to win it at +200 with Gerard Gallant and Andrew Brunette tied at +300.

Sutter is rightfully the favorite to win thanks to a strong regular season leading to a Pacific Division Title.

Brunette has done a wonderful job stepping us from his assistant coach role to head coach after Joel Quenneville resigned. Of course, Brunette inherited a 7-0-0 team that was already a top pick to win the Stanley Cup.

Of course, the Rangers were projected to be a fringe wild card team but finished second in the Metropolitan Division. His steady hand has guided a young team to an amazing season.

Something that could immediately be in Gerard Gallant’s favor is the fact that 5 of the last 12 Jack Adams Award winners were in their first season behind the bench with a new team.

Darryl Sutter is in his second season with the Flames taking over for Geoff Ward after he was dismissed in 2020-21. So he already had his systems established coming in and knew his team.

Voters obviously weigh heavily what a coach does in their first season behind the bench with a new team.

Of course, Sutter may win the Jack Adams simply because this is his 20th season behind the bench and he’s never won it before.

Can Gerard Gallant win it?

Although Brunette deserves consideration, I believe it will come down to Sutter and Gallant in the end. So can Gallant win the award?

Let’s start by disregarding the two losses the Rangers took to the Flames by a combined 11-1 score because they were both in October. Gallant had barely even implemented his systems at that time.

When you look at the total body of work both Sutter and Gallant have done this year it’s obvious they are both deserving. Their records are fairly even, but the Flames have a goal differential of +85 to the Rangers +47. That could be a big factor voters consider.

Here’s the question that the voters will have to ask themselves, which coach made the biggest impact to their team’s record and the answer should come up Gerard Gallant for one very big reason– the Conference/Divisions their teams play in.

The Eastern Conference made history with all 8 teams that qualified for the playoffs cracking 100 points. In the Western Conference, only 5 teams broke the century mark.

Finally, how can a voter not ask themselves, if the Vegas Golden Knights were healthy this season would the Flames have finished first in the Pacific?

I don’t think so. 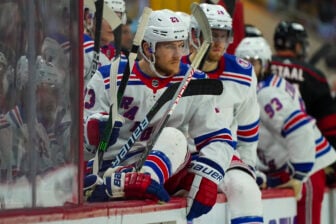 Also Read:
Rangers say ‘been there, done that’ after losing Game 1 in OT