Getting to know the 2021-22 New York Rangers coaching staff

The New York Rangers made the hiring of Gerard Gallant as the 36th head coach in franchise history official back on June 14. They wanted a veteran bench boss with a proven track record as the team moves out of their rebuild and development mode into contention.

Get to know Gerard Gallant

Gerard Gallant was a star player in the NHL with the Detroit Red Wings prior to becoming a head coach. He scored 480 points in 615 games before a bad back forced him to retire.

As a bench boss, he’s been successful in all three NHL stops which includes the Columbus Blue Jackets, Florida Panthers, and Vegas Golden Knights. The 57 year-old has a record of 270-216-4-51 which is good for a .550 points percentage.

“We are excited to announce that Gerard will be the next Head Coach of the New York Rangers,” President and General Manager Chris Drury said. “His vast experience and success behind the bench at several levels make him the ideal choice to lead our team on the ice.”

His most recent success came with Team Canada in the 2021 IIHF World Championships capturing Gold. Gallant took a young squad to international triumph despite starting the tournament 0-3.

The scouting report from around the NHL is he’s the type of coach that gets the most out of his players. Roberto Luongo who was Team Canada’s GM noted that Gallant has the ability to get guys to run through walls for him.

His philosophy on coaching young players is to give them a chance, but to also play them where they belong. In other words, a skilled forward like Vitali Kravtsov wouldn’t see the 4th line as he did under David Quinn.

Gallant’s biggest strength is his in-game management. He has a feel for the ebbs and flows, and understands how to get the most out of his matchups.

Another one of Gallant’s strengths is to leave all the X’s and O’s to his assistants. He believes in empowering his coaches, but made it clear that he will always make the final decision.

An example of that came in a recent interview on The Power Play with Steve Kouleas and Marty Biron. “To be honest with you, I like when my goaltending coach takes me aside and says ‘here’s our schedule and we’ll go day by day, I’ll let you know if one guy looks tired or needs time off’,” Gallant responded to a question on goaltending splits. “That’s how I like to do things. Benoit Allaire has been there a long time, he knows the goalies better than I do, so I’ll lean on him for that.”

So who is on the bench with Gallant in New York?

It should come as no surprise that Mike Kelly is one of the assistant coaches. Matter of fact, it was likely all but agreed to when Gallant was hired. The two have worked closely together in all three NHL cities that Gallant has coached and most recently won Gold in Latvia at the World Championships. You could easily call Kelly his wingman.

Mike was Gerard’s assistant in Florida and Vegas in the NHL. However, the two also worked in QMJHL with the Saint John Sea Dogs. Kelly was an assistant to Gallant from 2010 to 2012 while there. Kelly has also worked as GM and head coach in various other stops, including winning Gold with Team Canada in 2003 at IIHF World U18. He’s really a great candidate, and the history of success for the two working together is undeniable.

Kelly is expected to handle the forwards and power play for the Rangers next season.

Gord Murphy who was hired by Chris Drury to help Kris Knoblauch in Hartford now joins the big club. He and Gallant are no strangers as they worked together with the Columbus Blue Jackets.

It is expected that Murphy will handle the Rangers defense and penalty kill for the upcoming season. However, he has a much more important role coming in.

Murphy will act as a bridge between the previous coaching staff under Quinn and now Gallant’s. He was on the bench during the Rangers hot stretch when the prior staff was out on COVID protocol. Both Murphy and Drury got an up close view of what was and wasn’t working with the Rangers.

He will provide intimate details on players and strategies as they transition from Quinn’s style of play to Gallant’s.

Murphy also had a distinguished NHL career as a defenseman for 14 seasons. He played in 862 regular-season games and recorded 323 points with 668 penalty minutes.

One final note; the Rangers are still looking to add another assistant to the staff. An eye in the sky coach who is monitoring the game from above and getting a different perspective. It was believed at one point Dan Girardi would take that job but he has opted not to coach anywhere this season. So the search continues. 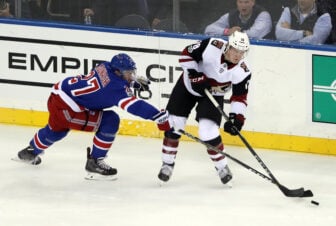 How close was Carey Price to going to Seattle? Read more.