Rangers should keep an eye on Coyotes center Christian Dvorak

As the New York Rangers continue to remain in the hunt for the big fish in Buffalo, they should also make sure they have a plan B and C in place.

The Blueshirts could go into this season with Ryan Strome as their second line center, and I feel will do just fine. However’ if Gerard Gallant feels Barclay Goodrow is best suited for the wing, then an upgrade over Filip Chytil at 3C would make sense.

Christian Dvorak on the trade block

As of right now, plenty of teams are starting to gravitate to the 6-2 and 195 lb pivot. In his five year NHL career he’s recorded 146 points in 302 contests with a face-off winning percentage of 51.5. Many teams believe he has a lot more upside offensively that has yet to come out playing in the desert.

There are a number of teams interested in trying to acquire Dvorak. The Bruins have been rumored as well as the San Jose Sharks, and the New York Rangers. Other teams that could be keeping a close eye on him, depending on how other things pan out are the Minnesota Wild and Montreal Canadiens. Here’s another team I’d also think might make a move – the New Jersey Devils.

While Gerard Gallant will most certainly need to tinker with his top six-forwards, a lot of that depends on if the Rangers make a trade for Jack Eichel. His bottom-six has a lot of good pieces to work with, and the key component was the acquisition and signing of Barclay Goodrow.

Last season the Rangers third line was just a lesser version of the top two scoring lines. Filip Chytil would often center a youth line that featured Alexis Lafreniere on his left and either Kaapo Kakko or Vitali Kravtsov on his right. A promising skilled line, but one that was easily overmatched on many occasions.

As I mentioned earlier, the Rangers need to decide if Goodrow will play third line center, or will they keep Filip Chytil there and bolster him with two physical forces in Kreider and Goodrow. At this point, I don’t believe the Rangers want Lafreniere playing third line minutes.

If the Rangers could swap out Chytil for Dvorak, it would give them a more proven pivot that can hold his own in the face-odd circle. An area that Chytil has struggled in greatly.

As for the 4th line, Kevin Rooney will definitely be on it as they chose to protect him in expansion. Ryan Reaves will also play a featured role on that unit. The aforementioned Barron, Julien Gauthier or Dryden Hunt could get the call on the wing.

Drury’s plan seems to be coming together, he just needs to have a few options. 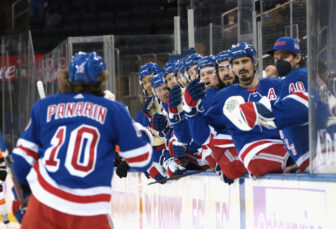 Get the latest rumors here at The Daily Goal Horn.