Henrik Lundqvist was dubbed The King very early on in his New York Rangers career. An illustrious 15 years on Broadway that earned him the right to have his iconic Number 30 hang high in the rafters at Madison Square Garden.

He is without a doubt royalty, and that goes double in his homeland of Sweden. That’s where Lundqvist found his love for hockey and wearing goalie pads.

Marie Lehmann of SVT Sports has chronicled Henrik Lundqvist’s entire career and put together a new incredible documentary Henrik Lundqvist – A Hockey Saga, which was just released today. It is only available in Sweden, but I spoke with her to highlight some of the amazing insights about Hank’s amazing journey.

Henrik Lundqvist had his heart broken when he learned that his goal to finish playing his NHL career with only the New York Rangers was not going to happen. On September 30, 2020 his contract was bought out bringing an end to his time with the Blueshirts.

“It’s almost like losing a family member or close friend,” Lundqvist told Lehmann. “There was going to be a mourning process. There were different steps to go through, but once I got to the stage of gratitude, I just felt ‘thank you for everything’ and then I could start looking forward.”

That looking forward was a chance to suit up with an old nemesis in Alex Ovechkin as a member of the Washington Capitals.

“Suddenly I was faced with a choice to go to Washington. A team that you have played against for so many years,” Hank said. “There was a lot that matched what I was looking for in the decision.”

Lundqvist signed a one year deal and started to prepare for the upcoming season now wearing a familiar old number.

“Number 30 for me is my time with the Rangers, that’s my New York jersey and I wanted to keep it that way, I cherish those years,” Lundqvist said of the change. “I have had very fond memories when wearing number 35. Swedish Championship, World and Olympic gold medals.”

Unfortunately, he never played a single game as he started feeling ill while training. It turned out that his heart was also broken physically.

In January of the 2020-21 season, Henrik opted to have open-heart surgery to correct a valve issue that would ultimately end his career. The procedure certainly saved his life and he reflected on it in the new documentary, even showing his scar which runs several inches long down the center of his chest.

“It’s the first thing I see every morning when I get up,” Lundqvist said.

Lundqvist will always be remembered for carrying the Rangers on numerous occasions, in particular the 2014 Stanley Cup run that fell short. He is and always will be one of the best Blueshirts of all-time.

At the end of the documentary, Lundqvist noted that he and his family will stay in New York for now and visit Sweden in the summer. Marie asked if he now considers himself a New Yorker?

Note: I want to thank Marie Lehmann for helping me share some of this incredible documentary with you. 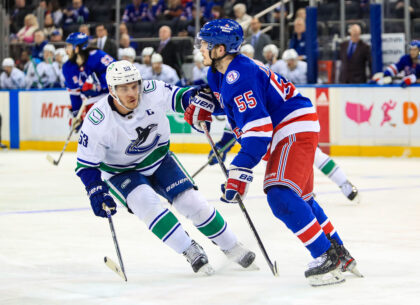