The New York Rangers certainly have the cap space to make a move on Elias Pettersson. The Canucks restricted free agent center would be prime for one, that is for sure.

In the aftermath of the Jesperi Kotkaniemi offer sheet, the Vancouver Canucks remained concerned that another team may decide to do the same with Pettersson.

Elliotte Friedman noted as much in his latest podcast. “The one team that has been concerned about an offer sheet all summer has been Vancouver,” he said. “When they saw what happened with Kotkaniemi they wondered ‘uh oh will that happen to us’ with Pettersson.”

So should the Rangers do it? If what happened between the Hurricanes and Canadiens is any indication, that should be a firm NO!

Despite Canes claims; revenge was a factor in Kotkaniemi offer sheet

Offer sheets in the NHL are rare, and successful offer sheets are even rarer. The last time one was attempted happened on July 1, 2019. That’s when the Habs went after Carolina Hurricanes forward Sebastian Aho.

Montreal GM Marc Bergevin gave Aho a front loaded 5-year contract worth $8.46M AAV against the cap. The play here was $11.3M in the form of a signing bonus which is what the Canes needed to come up with to match.

“Sebastian Aho accepted our offer,” Bergevin said in a statement. “He wants to come to Montreal. He sees our youngsters coming up in the organization and he wants to be a part of that. We’re proud, but there’s still a waiting period.”

The Canes did indeed come up with the money. Aho is still in Carolina but apparently Owner Tom Dundon and GM Don Waddell never forgot the Habs sneak attack.

According to Pierre LeBrun, the Canes tried trading for Jesperi Kotkaniemi prior to the offer sheet. The 21 year-old signed a 1-year deal with Carolina for $6.1M. If the Habs matched the offer they would’ve been $8M over the cap, which is partly why Carolina did it and was successful.

But this was also payback for Aho despite GM Waddell saying, “It certainly was not revenge,” he said. “We talked about this player, we know this player.”

Right, and if you believe that I have a bridge in Brooklyn to sell you.

From the moment the Canes got Kotkaniemi to sign the offer sheet they use social media to troll the Habs. Waddell even went as far as using Bergevin’s 2019 statement on Aho against him.

“Jesperi Kotkaniemi accepted our offer,” Waddell said. “He wants to come to Carolina. He sees the core we’ve built here and he wants to be a part of that. We’re proud, but there’s still a waiting period. When you make an offer like that, we saw a vulnerable position. The offer, with the compensation and the core we have, we realized that it was the best chance we had to get the player.”

Pettersson is worth an offer sheet

“I want to stay [in Vancouver], but I also want to play for a team that’s winning and has the chance to go far into the playoffs every year,” Pettersson said in a recent Swedish interview. The talks are still ongoing with his agent JP Barry thinking bridge deal.

Per CapFriendly, Vancouver has around $10 million in cap space to get deals done. The expectation is that it will take more than that to sign Pettersson and Quinn Hughes.

“We’re going to look at everything, but I think anything for Pettersson will be five or under, and then we have to look at with Quinn whether or not we can do a little more or not,” Barry explained after the season. “We’ll probably explore some of that, but that’s where we are right now.”

This past season, the 21 year-old Pettersson struggled with injuries but managed 21 points in 26 games. He is an integral piece to any success the Canucks hope to have.

When you look at RFA’s to attempt an offer sheet with, it’s him not Kotkaniemi.

I get the idea of signing a young center like Pettersson. However, Chris Drury, who is a rookie NHL GM isn’t going to make his first big moment trying to take advantage of another team’s cap issue and steal a young star.

Good luck trying to make any trades after that. Just ask 1994 Cup winning GM Neil Smith about that. He paid the price for offer-sheeting Joe Sakic years ago. After receiving a fax back from the Avalanche of the middle finger when they matched, he admitted that many teams didn’t like the move. It was so bad that when ownership asked him to do it again with Paul Kariya he told them to “fire me.”

That’s just the high level reasons for not offer-sheeting Pettersson, besides the fact that you are only doing the other GM’s job for him. The Canucks will match any offer – so let it go.

Also remember that the Rangers have the current Norris Trophy winner Adam Fox heading to RFA status. That’s the immediate threat, but what about Alexis Lafreniere, Kaapo Kakko, and K’Andre Miller? All of these players are ripe for an offer sheet, and why give a team further motivation.

Offer sheets rarely don’t work, and even this one between the Canes and Habs may backfire on Carolina in the end. One thing is clear, the Habs attempt at trying to steal Aho in 2019 cost them in 2021. 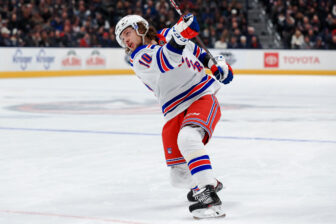