Igor Shesterkin is the NHL’s reigning Vezina winner and considered the favorite to repeat. The last goaltender to win back-to-back titles was Martin Brodeur with the New Jersey Devils in 2007 and 2008.

While discussions about the Vezina are very premature, what should at least be discussed is Shesterkin’s incredible start to the year.

Shesterkin is one of only three goalies this season to go unbeaten in regulation along with the Flyers’ Carter Hart and Bruins’ Linus Ullmark.

Last night, Shesterkin out-dueled Hart as the Rangers beat the Flyers in OT by a 1-0 score. Next up, will be Ullmark as the Bruins come into the Garden on Thursday night.

Shesterkin, 26, was spectacular last season to capture the Vezina trophy as the league’s best goaltender.

By posting a 36-13-4 record, he helped lead the New York Rangers to a second place finish in the Metro Division and the Eastern Conference Final. His .935 SV% and 2.07 GAA led the league in both categories for the regular-season.

This season, Shesterkin hasn’t been as lights out regarding his GAA and SV% but his battle level has gone up a notch. Currently, his record stands at 6-0-2 with a 2.22 GAA and a .921 SV%. It’s almost like he refuses to lose in regulation and that was obvious on Tuesday night versus Philadelphia.

After Shesterkin shutout the Flyers by stopping all 19 shots sent his way, including a few high danger chances late in the third, head coach Gerard Gallant was asked if that was his best game of the season.

“No,” Gallant quickly responded. “He didn’t have a lot of work and that’s the toughest thing. But I think at the end he made two, maybe three great saves and that was huge.”

Actually, Igor’s best game came in a shootout loss to the Colorado Avalanche where he stopped 42 of 44 shots. In that contest, a misplay of the puck early in the third period gave the Avs a 2-1 lead.

The gaffe was something no one expected considering how incredible Igor is at playing the puck. Regardless, it did and a lesson was learned.

“It was a good game,” an upset Shesterkin said afterwards. “One goalie saved a shot and the other one missed a shot. That’s the difference.”

There’s enough evidence to indicate that Shesterkin can improve on all his stats. A scary thought for opposing teams.

As the New York Rangers defense continues to improve and limit the amount of chances in the slot area, Shesterkin’s stats could be otherworldly.

So, is it really too early to talk about the Vezina? If Shesterkin can pull off the feat of winning back-to-back titles, he will be the only goalie in Rangers history to do so. 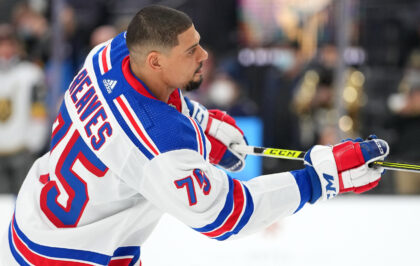 From the latest news, rumors and scores check out all our NHL coverage at The Daily Goal Horn.