Ryan Reaves is one of the toughest players to ever step foot on NHL ice.

In his career, he’s been credited with 75 regular-season fighting majors over the course of 13 years. You can also add in four preseason fights and 2 postseason bouts per HockeyFights.

However, there’s one opponent that has challenged him to a fight when his playing career is over.

Reaves made an appearance on the Spittin’ Chiclets podcast where Paul Bissonnette is a host. They got into a dispute over their fight history, especially regarding their first match which occurred on March 22, 2011.

HockeyFights voting had Bissonnette as the winner due to the takedown by 51.4% in their first fight. Reaves was the decisive victor by 95.2% in round two on April 18, 2013.

“I think I won the first fight, then you got lucky at Scott Trade,” Bissonnette complained that he caught a rut.

Reaves immediately interjected with a laugh, “You caught a rut? The only thing you caught was my right fist.”

In the end, Reaves was challenged to fight Bissonnette at Rough N Rowdy.

“We have an offer for you. Rough N Rowdy when you’re retired,” Bissonnette began.

“Send the paperwork right now. I’ll do it for free,” Reaves responded.

The interviewed ended with the two saying, “I love you bro.”

Will we see these two go at it when Reaves retires? It seems like there’s a real possibility.

Reaves, 35, has no points on the season in 10 games but leads the team with 34 hits. This is the final year of his contract.

What a rough start for young Vitali Kravtsov as he was ruled out for at least a week by the Rangers with an upper-body injury.

Kravtsov has been hurt three times already this season. The latest came in Dallas on Saturday chasing a loose puck. On the play, Kravtsov lost his balance and went hard into the boards with the Stars’ defender appearing to hit his head.

“Every time he gets on the ice he gets hurt,” Gerard Gallant shrugged. “It’s a shame.”

Larry Brooks of the NY Post is suggesting that Kravtsov agree to a conditioning stint with the AHL Wolf Pack upon his return.

A conditioning assignment would allow the 22-year-old winger, who has been injured three different times within his first four games, to get into the season and re-acclimate himself with the North American-sized rinks and stop-and-start stylistic demands without the pounding pressure of attempting to do that under the Broadway spotlight….

But this can only happen if Kravtsov — out this time after hitting his head against the boards as a consequence of a collision with Stars defenseman Jani Hakanpaa in Dallas on Saturday — gives his consent.

Kravtsov’s agent was asked by the NY Post about the hypothetical situation, to which he replied back with “no comment.”

A conditioning stint may not be the worst idea.

The Rangers are back at practice today and both Mika Zibanejad and Jacob Trouba were given the day off for maintenance per the team. Filip Chytil was back at practice and skating on the first line with Chris Kreider and Kaapo Kakko in Mika’s absence. 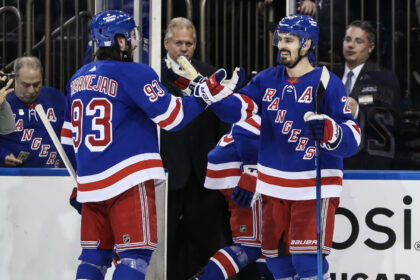