Ryan Reaves doesn’t fight as much as he used to these days. Mainly because no one is willing to square up with him.

According to the site Hockey Fights, Reaves was in only three tussles in 2021-22 and was voted winner in two of them.

Last night, after K’Andre Miller took a hard hit from Marcus Foligno that left him wobbly and with a cut near his eye, Reaves made sure to remind NHL teams if you mess around– you’ll find out.

Ryan Reaves reminds teams not to mess around

The fight was a no contest and a clear win for Reaves serving as a reminder across the league that there will be no liberties taken on the Rangers without retribution.

“Having [Reaves] on the bench has everyone puff their chest out a little more,” Adam Fox said last season. “We feel a little safer. He keeps other team’s guys in check as well. They know they can’t take liberties because they’ll have to answer to him. Having a guy like him allows everyone else to play a little bigger for sure.”

Reaves, 35, registered 5 goals and 13 points while averaging 10:39 per game in his first season on Broadway. He led the team in hits by a wide margin at 279. Defenseman Jacob Trouba was next at 207. His reputation as one of the most feared fighters in the league certainly keeps the opposition in check from taking too many runs at his teammates.

“He’s a good fighter,” Shesterkin said. “I don’t ever want to be in front of those hot hands.”

Over the summer, Reaves hooked up with wrestling legend Ric Flair and put out a hype video.

Last night, Foligno messed around and found out. That should serve as message to the rest of the NHL. WOOOOO! 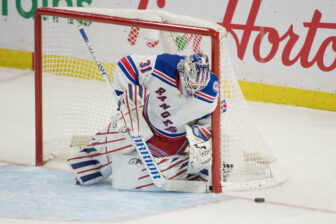