The New York Rangers will face the Minnesota Wild in their second game of the 2022-23 season, although it’s their first on the road.

Head coach Gerard Gallant confirmed that Igor Shesterkin would get the nod in between the pipes in Minnesota, which likely means Jaroslav Halak will make his official Rangers’ debut Friday night in Winnipeg.

“I haven’t thought about that,” Gallant said of the goalie split, “but I’m sure that’s what’s going to happen.”

“[Blais] is closer (to returning),” Gallant updated. “We’ll see how he gets along today, but he’s possible for tomorrow (against the Jets).”

As for the expected lines and defense pairings they should look like this:

Alexis Lafrenière was bumped up from the third line LW to the second line RW after Vitali Kravtsov suffered an upper-body injury in the first period of the team’s 3-1 win over the Lightning.

“He was good,” Gallant said of Laffy. “We all know he prefers left wing but he’s going to the right side and do his job. I thought the line played well the other night. Laf will adjust.”

Minnesota is home to both K’Andre Miller and Ryan Lindgren. They spoke briefly about playing in their hometown arena.

“It’s always fun coming back here and playing with family and friends in the building,” Lindgren said. “I obviously spent a lot of time watching games here, so it’s always cool to come back and play.”

“Ever since I can remember coming down to the X and going to the game with my mom sitting behind the bench… there’s a lot of good memories,” Miller explained. “It’s good to be back.” 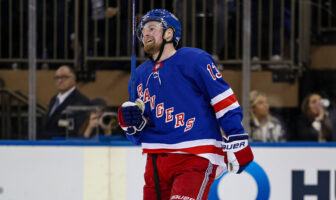