Vitali Kravtsov out for NY Rangers road trip, Sammy Blais back at practice, and more

The New York Rangers announced that forward Vitali Kravtsov (upper-body) will not be joining the team for at least their two game road trip which begins in Minnesota tomorrow night and ends in Winnipeg on Friday.

He will be reassessed this upcoming weekend prior to the Rangers home game Monday against the Anaheim Ducks.

Kravtsov was injured during the first period of the team’s opening night victory at Madison Square Garden by Lightning defenseman Victor Hedman.

On the play, Kravtsov went off-balance into the boards where Hedman put his knee into his chest and proceeded to shove his head down.

Sammy Blais back at practice

While Kravtsov is on the shelf, there was some positive news at practice with Sammy Blais in a non-contact jersey.

Blais, 26, was hit hard by the Islanders’ Alexandar Romanov in the team’s last preseason game on Saturday. He left in the first period and didn’t return. When healthy, he should slot on to the third or fourth line.

“He’s day-to-day and coming on the trip,” Gallant said. “Im not saying if he’s playing tomorrow. He skated today but not yet ready to play. That could change in the morning.”

Here’s a quick look at the practice lines for forwards per multiple reports:

In the win over Tampa, the Rangers did a great job defensively to keep players like Steven Stamkos, Brayden Point, and Nikita Kucherov from getting high danger chances.

There was some concern heading into this season after losing all their veteran trade deadline acquisitions like Andrew Copp, Frank Vatrano, and Tyler Motte if the youngsters could fill that void.

“I thought all our young kids played like men [on Tuesday],” Gallant said after the game. “If you watched us last year we were pretty loose in the defensive zone so I thought we did a good job. I think it’s from the kids growing up.” 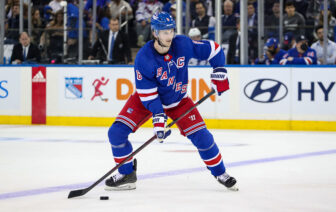