The New York Rangers have announced that Vitali Kravtsov will not return due to an upper-body injury.

At the 7:01 mark of the fist period, Vitali Kravtsov left the game after a hard hit into the boards by Lightning defenseman Victor Hedman. On the replay, Hedman appeared to put a knee into the youngster’s chest and then proceeded to shove his head down.

He was replaced by Alexis Lafreniere on the second line right wing.

Kravtsov only played a few shifts for a grand total of 1:28 in this contest.

The 22 year-old forward is looking to put his difficult past with the New York Rangers organization behind him. After several tumultuous seasons since being the 9th overall pick in the 2018 NHL Draft, he was ready to prove his worth.

“I’ve definitely made a lot of noise previously so there’s this necessity to redeem myself a little bit,” he said via a translator after practice today. “I just want to do what everyone else is doing. Put in the work, get on the team, and do my part.”

Kravtsov came to the New York much earlier than other players to begin his training and received high praise by management.

For his brief NHL career, he’s played 20 games for the Rangers at the tail-end of the 2020-21 season registering two goals and two assists.

We will update this article when more info becomes available. 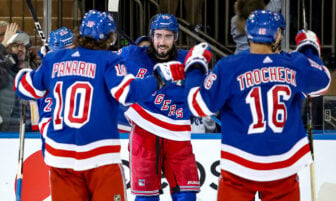