Alexis Lafrenière was moved up to replace Vitali Kravtsov on the team’s second line due to injury early in the first period of their 3-1 season-opening win over the Tampa Bay Lightning.

Playing on the right wing with Vincent Trocheck and Artemi Panarin, there were times where he appeared out of sync with his new linemates. That’s to be expected considering they didn’t play a single minute in the preseason as a trio.

“After a couple of shifts you get used to it,” Lafrenière said on Wednesday. “You’ve got to talk a little bit and get to know where they are on the ice. After that, I’ll just play my game.”

In a little over 15 minutes of ice time at even strength on Tuesday, Lafrenière posted 3 shots on 5 attempts and recorded 4 hits.

Lafrenière, 21, scored 19 goals and totaled 39 points in 79 games last season. In the postseason, he showed that his game could find another level as he picked up his physical play. That led to an additional 9 points (2G – 7A) in 20 playoff contests.

What was most impressive about his stats is Alexis did it by playing third-line minutes with little to no power play time. That’s all going to change this season, at least regarding power play time. Kravtsov’s injury now presents a big opportunity for him to lock a spot on one of the top two lines for the rest of the season.

Head coach Gerard Gallant has also been flirting with the idea of moving Lafrenière up the lineup. Matter of fact, in Lafreniere’s first exhibition contest, he opened on the right wing with Vincent Trocheck so there’s a little familiarity there.

“I was thinking about putting Laffy up there (on the second line) for most of training camp to be honest with you,” Gallant admitted yesterday.

With Kravtsov out at least the next two games, the first overall pick from the 2020 Draft can achieve his goal of being in the top six early this season.

For his young career, Lafrenière has amassed 31 goals and 52 points in 136 games.

This is also the final season of his entry-level contract and you can be sure Alexis is looking to post some big numbers in order to get a lucrative longterm deal.

Before the season started, the Ottawa Senators announced an 8-year contract extension for Tim Stutzle worth $66.8 million. That’s an AAV of $8.35 million and a big headache for the Rangers concerning Lafrenière.

When the news hit the wire, a league source immediately told me to bust out my calculator because he doesn’t see Lafrenière signing for less.

The first thing the Rangers and Lafrenière will do before sitting down to talk contract extension is to find comparables. It may still be a little too early to identify enough good ones, but it’s hard not see Stutzle as a possibility.

Stutzle, 20, was chosen by the Senators as the third overall pick in the 2020 NHL Draft. Selected behind Alexis Lafrenière and Quinton Byfield (Los Angeles Kings) respectively, outperforming them both to date on the score sheet.

Now I know what you are saying, how could Stutzle be a good comparable?

Well, let’s start with the fact they were both drafted in the same year and that will definitely be brought up in negotiations. Then you have to go beyond the surface numbers, which Stutzle has a clear advantage because he averaged 18:24 per game last year versus Lafreniere’s 13:59.

However, Lafrenière’s camp will highlight the fact that his 5v5 points per 60 minutes of play (p/60) is 1.70, which is higher than Stutzle’s 1.54 over their first two seasons in the NHL.

All of a sudden, Stutzle as a comparable isn’t so outlandish is it? And what happens once Alexis starts playing 18 minutes a night with power play time on the top six? One can safely assume better production.

This is going to be an interesting negotiation to say the least. 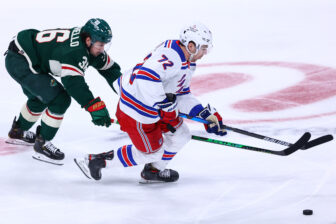