Igor Shesterkin has Vezina Trophy in his grasp with strong finish

Igor Shesterkin propelled the New York Rangers to their 50th win of the season against the Winnipeg Jets on Tuesday.

In the process, he picked up his second straight shutout and sixth of the season. For the Blueshirts, it was their third game in a row where they’ve blanked the opposition (Flyers, Red Wings, and Jets).

“We trust him, he’s won a lot of games for us,” said Gerard Gallant of his number one goaltender.

Coming down the stretch, it appears Lundqvist’s heir is ready to secure the bag and take home the Vezina.

Per Vegas Insider, he’s the clear cut favorite at -800. His competition is a distant second and third in Carolina’s Frederik Andersen at +1200 and Calgary’s Jacob Markstrom at +1400.

New York has five games left to play this season with only one more back-to-back set. It’s possible he will get at least another 3-4 starts before the playoffs begin.

Even so, if he were to be rested from here on out, the trophy is very likely his.

Shesterkin played in his 51st game of the season. According to the NY Post, his previous season high was 39 games in the KHL during the 2016-17 campaign.

“I went on to the stats site to see how many games I’ve played this season and I’m still shocked to be honest,” Shesterkin laughed.

“I love winning, especially when the team puts forth a big effort.”

The young goalie, who signed a 4-year deal this summer with an AAV of $5.66 Million hit a mini-slump not too long ago. He’s come out of it strong and credits his teammates for that.

“The guys have been playing a lot harder defensively and cleaning up the zone so I can see what’s going on,” Shesterkin said after his latest shutout.

From March 10 to April 6, he was an uncharacteristic 4-4-1 with a 3.11 goals-against average and .886 save percentage. The statistical dip has raised eyebrows all over Rangerstown and he was asked about it after the team’s 4-3 shootout loss against the Flyers on Sunday.

On April 7, he shutout out the Pittsburgh Penguins and has been lights out since.

After the buzzer sounded and Shesterkin notched his 8th career shutout, his coach heaped high praise on his netminder.

“It’s not just the last three games, the shutouts, it’s been the last number of games we’ve been playing a lot better defensively,” Gallant marveled. “It makes you feel more confident as a coach that you’re not just winning because of your goaltending.”

Shesterkin hasn’t just been great at keeping pucks out, but also making plays out of his own zone.

“The plays he makes and the breakout passes are just spectacular,” Ryan Strome said after a win against Ottawa where he almost scored into an empty net. “He’s probably a better passer than 75 to 80 percent of our team. I think guys would openly admit that too.”

New York is going to the playoffs, they are also on the verge go securing their first division title since the 2014-15. At a lot that has to do with Shesterkin’s goaltending.

It’s a big reason why he’s going to win the Vezina and be in the conversation for the Hart Trophy. 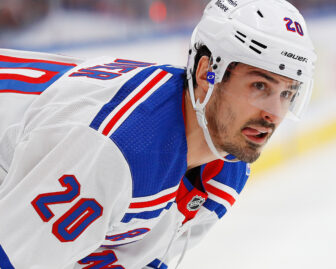