The noise around the New York Rangers is getting louder with each passing week. As they continue to win games and maintain their lofty position atop the Metro Division standings, you hear them linked to players on the trade market.

Dating back to when Sammy Blais was lost for the season due to a torn ACL in November, top NHL Insiders have been discussing the Blueshirts. From forwards to defensemen, GM Chris Drury is keeping his options open to improve his team.

Rangers to be aggressive with trades

Over the last two months, the Blueshirts have been mentioned on TSN’s Insider Trading, Sportsnet’s 32 Thoughts, and The Daily Faceoff numerous times.

“Chris Drury, the general manager for the New York Rangers, is looking for a middle-six forward, which isn’t a term we use often in hockey,” Darren Dreger said before Thanksgiving. “That can be a third-line player or someone who can punch into the top six.”

He followed that up before the Holiday Break with how Drury has continued to look for months on finding a possible solution but to no avail. Teams are still working out if they are playoff contenders, but as the top dogs keep winning, they realize their playoff chances are slim.

Elliotte Friedman and Jeff Marek discussed the Rangers on a recent podcast and pointed them out to be one of the more aggressive teams in the trade market.

“New York is in (the playoffs) and Chris Drury keeps quiet, but I could see them taking a surprise swing,” Friedman said.

One of those players that they could be taking that swing at is defenseman Jakob Chychrun.

Chychrun, 23, has just 8 points in 29 games with the Yotes’ this season and was dealing with an injury. Last year was a breakout for him with 41 points in 56 games. The left-handed rearguard has three years left on a cap friendly deal of $4.6 million.

While many wonder just who has the offer on the table that Marek is referring to, it should be noted that the L.A. Kings had a large contingent at the Garden watching the Rangers and Coyotes game.

If the Blueshirts were to land him, and depending on whom they trade, it would likely take them out of the rental market for a blue-liner. Giving up a first round pick will also make it tough to land a rental forward.

Most insiders believe Chychrun will be traded well before the deadline, so keep tabs on this one.

New York’s most glaring hole is on the top six at right wing. Now with both Kaapo Kakko and Filip Chytil day-to-day, it’s only getting worse.

According to some insiders, Chris Drury may be looking at the non-rental trade market to bring in a top scorer.

“One of the teams that has really been all over J.T. Miller to bring him back is the New York Rangers,” Frank Servalli said on Canucks Central. “Are there younger pieces on the Rangers’ roster that they’d be willing to part with rather than just draft picks? And how important would it be for them to be in a spot where they have that extra year of J.T. Miller and not have to sweat (what his next contract) looks like.”

Miller, 28, has one more year left on his deal worth $5.25M before becoming a UFA. He’s also been extremely productive with 39 points in 39 games for Vancouver this season.

One thing is clear and has been pointed out to me, the acquisition of Miller would make it harder to retain Ryan Strome. It should also be noted that Artemi Panarin will not be very happy if his center leaves via free-agency.

Another forward the Rangers are reportedly in on is Boston Bruins winger Jake DeBrusk, per Marek.

The 25 year-old has 13 points in 33 games this season. According to several reports the Bruins are looking for a top 4 defenseman in return. A fairly steep price for the struggling winger.

While the interest in a rugged forward like DeBrusk makes sense with what Chris Drury is building in NY, he is another left-handed shot that plays the LW. The Rangers are already struggling to find ice time for #1 overall pick Alexis Lafrenière with Chris Kreider and Panarin cemented as the top two wingers on the left side.

Can DeBrusk play RW? He will also be an RFA next summer and currently makes $3.6M against the cap. The Rangers will have salary cap concerns starting next season, so this still seems like a tough fit.

Rangers will be buyers at the NHL Trade Deadline

If all the options above fail, the New York Rangers will have plenty of choices come the NHL Trade Deadline on March 21 in the form of rentals. That would be a player on an expiring contract who is most likely to walk in free agency after the playoffs.

On the top of Chris Drury’s list is San Jose Sharks center Tomas Hertl. He could automatically slot as a top six winger. Or even give the team more depth down the middle on the third line. Regardless, he’s a perfect fit for a playoff run.

“He has almost a 100 per cent no-trade clause,” Pierre LeBrun recently reported. “Only three teams are on his “yes” list. He has lots of control and one team to keep an eye on is the New York Rangers, who I think have him on their list.”

Another option could be Vegas’ Reilly Smith.

Vegas may need to clear out salary in order to fit Jack Eichel under the cap when he comes off LTIR. That may leave Smith, who is in the final year of his contract with a $5 million cap hit on the outs.

On defense, Mark Giordano would be the top rental defenseman that Drury could land for this team. He’s a battle-tested veteran that could easily replace Patrik Nemeth on the third pair, and play clutch minutes late in games with Jacob Trouba.

In the end, all the buzz in the rumor mill points to an aggressive Chris Drury on the trade market. His Rangers are one of the top teams in the NHL and people are starting to wonder if they are a legit Cup contender.

Drury looks primed to take some big swings. He will do so by unloading his wealth of young players/prospects. The problem with taking a giant hack is if you miss, you usually miss big too. 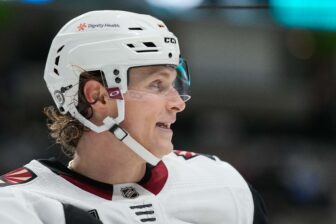