Adam Fox may have the Norris Trophy, but when it comes to him and his fellow defensemen, they turn to Jacob Trouba to lead.

On a recent episode of NHL.com’s @TheRink podcast, Fox talked about who he looked up to when he joined the Rangers. He mentioned Marc Staal, who has since been traded, and Trouba.

“Troubs [helped me] as a young guy,” Fox explained. “He’s been in the league for 8 years now. Guys like that help you transition [to the pro level].”

The 23 year-old cited Trouba and having previously played with Ryan Lindgren as some factors that helped him get into a comfort zone so quickly.

That’s pretty high praise, and explains why Trouba is under consideration for captain.

Trouba is a key player to Rangers playoff hopes

Late last season, when the Rangers lost Trouba due to a concussion in the first period of crucial game against the Islanders, it sent the team spiraling. Without the 27 year-old defenseman, the Blueshirts lost that game and were quickly removed from the playoff picture after a serious push that started in March.

Trouba’s importance to this team goes way beyond his on-ice efforts. Thanks to his calming influence, rookie defenseman K’Andre Miller had an outstanding inaugural campaign. Miller also publicly cited how helpful Trouba has been to him personally on and off the ice.

He currently wears an A, and is being considered for the next Rangers captain. However, the team needs him to return to his 2018-19 form. In his last season with the Jets, prior to the Blueshirts trading for him, Trouba scored 50 points in 80 games. So far in NY he’s only scored 39 points in 108 contests.

If the Rangers want to make the playoffs, he needs to produce more offensively while also being the team’s go-to shutdown defender late in games.

Trouba is the tone setter on the blue-line

At 6-3 and 209 lbs, Trouba is the squad’s most physical blue-liner. He led the Rangers defense last year with 111 hits in just 38 games. In contrast, Lindgren who loves to hit everything that moves, had 98 bodychecks but in 51 contests.

Adam Fox is without a doubt the team’s best defenseman, but when the going gets tough all eyes turn to the veteran to lead. Trouba sets the tone on the ice and is a vocal leader in the room.

When the Rangers started off last season against the Islanders with a shutout loss, it was Trouba who spoke to them in the locker-room. They bounced back with a shutout of their own the next night.

It was the first of many times he spoke up in the room. “It was nothing crazy,” he said downplaying his pep talk. “A lot of guys stepped up.”

Ultimately, it will come down to him or Chris Kreider for the C being sewn on their chest. Regardless, it will be Trouba that will need to take this Rangers defense to the next level. If Trouba can elevate his offensive production a bit, he could help the Rangers reach their goal of making the playoffs this season. 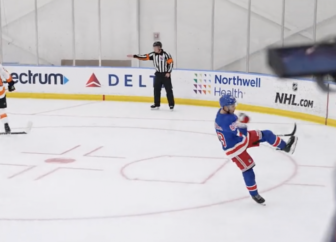