Rangers’ Jacob Trouba took out Sidney Crosby from Game 5, will he be suspended? 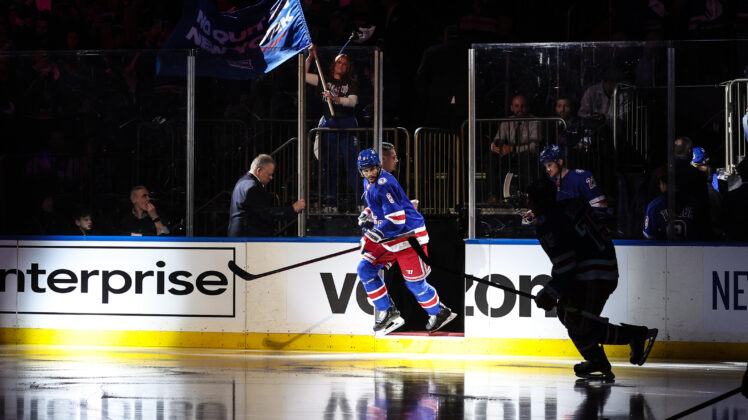 May 3, 2022; New York, New York, USA; New York Rangers defenseman Jacob Trouba (8) takes the ice before the game against the Pittsburgh Penguins in game one of the first round of the 2022 Stanley Cup Playoffs at Madison Square Garden. Mandatory Credit: Vincent Carchietta-USA TODAY Sports

Jacob Trouba was having a rather pedestrian playoff series up until Game 5 with the New York Rangers facing elimination.

The 28 year-old defenseman probably still had coach Gerard Gallant’s criticism of the team playing “soft” echoing in his ears and came out hitting. In an impressive performance, he was a physical presence officially picking up 3 blocks and 2 hits (there were more).

His biggest hit turned the game around, and quite possibly the series.

UPDATE: No hearing for Trouba

Penguins captain Sidney Crosby looked like he took an elbow to the head from Trouba late in the second period. On the play, Crosby gets the puck in the slot and looks down to control it. Trouba can be seen also going for the puck with his stick as both players collided

Trouba, who kept his head up on the play can be seen bracing for contact as Crosby picks him up late. With Crosby seeming to go down just prior to the hit, Trouba’s initial point of contact appears to be Crosby’s chest.

Crosby went to the bench and immediately put his head down before going to the locker room. He did not return to the ice after that shift ended and no penalty was called on the play.

Trouba capped a three-goal outburst after the collision and helped the Rangers win Game 5 to stay alive in the series.

Afterwards, an upset Penguins coach didn’t say much but let it be known what he thought of the hit.

“Did you see the hit? You probably have the same opinion I do,” Mike Sullivan said about the legality of the play.

Crosby, 34, has 9 points in this series and if he can’t go it will be a big blow to the Penguins. Game 6 is scheduled for Friday in Pittsburgh.

Will Jacob Trouba be suspended?

The big question now for the Rangers is whether or not Jacob Trouba will be suspended.

Trouba is a hard hitting defenseman, who has laid out several players this season with big open ice hits. Chicago’s Jujhar Kaira was sent to the hospital earlier this season and Colorado’s Nathan MacKinnon also felt what it’s like to get caught by the Trouba-Train but was able to return in that game. Neither hit led to a suspension, and this one appeared more accidental than anything else.

While there’s plenty of cried from the Penguins and their fans to see Trouba suspended, that isn’t what many analysts are saying.

“If you’re trying to throw a headshot with your stick hand it’s impossible,” former Canucks defenseman Kevin Bieksa said on Sportsnet. “He’s going stick on puck and it’s a bit of him bringing his arm in as Crosby’s turning. I think there’s no suspension.” 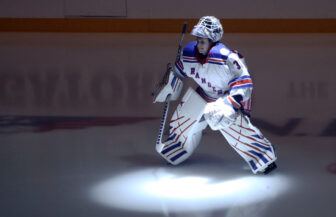 New York Rangers rally to stay alive with a big win at Madison Square Garden over the Pittsburgh Penguins. Plus the Panthers stun the Caps and the Flames burn the Stars. Read More.