All indications point to the two sides coming to terms on a bridge deal but as of today’s opening of free agency, he remains unsigned.

“We think the world of him, he’s a terrific young player. We want him here for a really long time,” GM Chris Drury said on Wednesday. “It’s a player we want and I’m not too worried about getting him into the fold soon.”

Drury’s comments today reinforce reports that a deal is close to being completed.

Kakko, 21, posted 18 points in just 43 games due to being on the injured list three separate times this past season. During the playoffs, he showed an ability to hang with the big boys in stiff competition. In 19 postseason games, he picked up 2 goals and 5 points which was highlighted by his strength on the puck.

Unfortunately, that wasn’t enough to prevent him from being scratched in Game 6 of the Eastern Conference Final against the Tampa Bay Lightning.

Head coach Gerard Gallant labeled it a hockey decision by saying he was just trying to win a game. The choice to scratch Kakko made headlines as you would expect but did not seem to bother Kakko.

“I like to play here,” Kakko said on breakup day. “I think [the scratch] gives me more motivation. I want to show I’m better than that. You should put me in the lineup because I’m a good player.”

For his three-year career, Kakko has managed just 58 points in 157 matches. The Ranger selected Kakko second overall in the 2019 NHL Draft.

No offer sheet expected for Kakko

After the playoffs, there was plenty of speculation that Kakko could be prone to an offer sheet due to the Rangers limited cap space.

Per Mollie Walker of the NY Post, she estimated the number to force the Rangers into not matching would be between somewhere $4.2 and $6.3 million.

Speaking with a knowledgeable source, they noted that the Rangers are in good position to match an offer sheet. After today’s singings, including Vincent Trocheck, the Rangers have $4.7 million in space per CapFriendly to deal with such an offer. 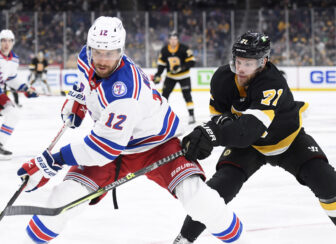