The New York Rangers went into Arizona to face the NHL’s worst team in the Coyotes and struggled for half the game. Things actually looked bleak before Chris Kreider went from goal scorer to playmaker to get the offense going.

In the end, Keith Kinkaid made the stops and Kaapo Kakko scored two key goals to get the Rangers a win.

“We just kept battling and battling,” Kinkaid said afterwards. “Making plays at the end was the key.”

The Blueshirts, who should have come out with a measure of urgency to their game had a forgettable first period and a half.

Arizona fired 13 shots on Kinkaid in the first, who struggled with a few shots that went five-hole. Libor Hajek bailed him out by sweeping a puck that went though his legs away from the goal-line. However, he wasn’t as lucky when a harmless looking shorthanded wrist shot by Loui Eriksson squeaked through the wickets for a Yotes’ 1-0 lead with 2:14 to go.

The start of the second period looked even worse than the first for the Rangers. Out of the gate, the Rangers took an icing and then seemed to be a step behind for first half of the middle stanza. Things got worse when Artemi Panarin left the game with a lower-body injury that Gerard Gallant termed “minor” and “day-to-day.”

They finally snapped out of it on a delayed penalty. Kaapo Kakko would put home the rebound of a Mika Zibanejad shot to tie the game with 9:20 left to play. Chris Kreider would get an assist and tied Andy Hebenton for 20th all-time in Rangers scoring with 368 points.

The Rangers showed life heading into the third by outshooting the Coyotes 15-8 in the second. However, a Jacob Trouba high-stick meant they would need to kill a penalty to start the third.

“Our game was a lot better (in the second), we were more on the attack,” Barclay Goodrow said after the period. “I think we still have a little more to give.”

New York would find that “little more” after the Coyotes took a 2-1 lead 8:47 off the stick of Clayton Keller. What saved them? The power play.

Zibanejad took his old spot on the PP with Panarin out. The Blueshirts leading goal scorer over the last two seasons ripped a wicked wrist shot to tie the game with 5:46 left. Adam Fox picked up the assist, as did Kreider.

“I like the way we battled back,” Zibanejad said. “Power play came up big.”

There’s a good reason why the Arizona Coyotes are the worst team in the NHL. With 2:59 left on the clock, they made a poor line change and were called for a Too many men penalty.

It took the Blueshirts highly-rated PP 41 seconds to put the nail in the Yotes’ coffin. Ryan Strome found Kreider at the side of the net, who fed Kakko in front for his second of the night and eventual game-winner.

“I got a chance on the first power play. I didn’t know it was that simple to go to the net and keep your stick down,” Kakko said with a smile.

“You’ve got to dig down and find a way,” Gallant said. “Our guys looked tired on the bench and they were dragging their feet. We found some extra energy and it was a huge two points for us.” 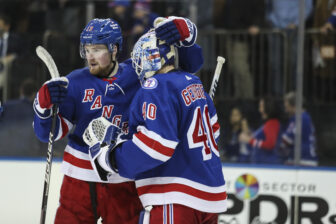