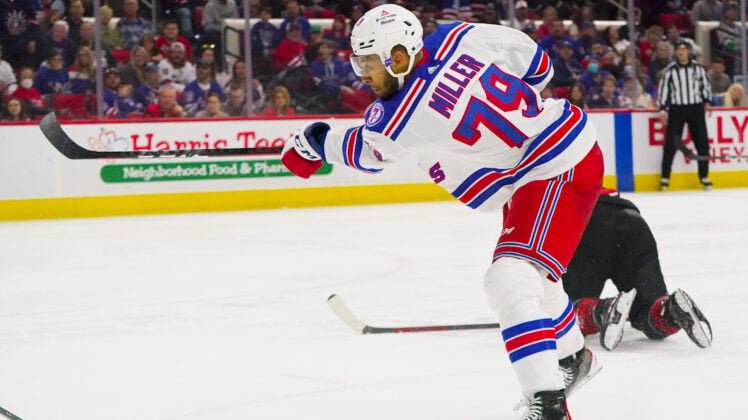 The New York Rangers blue-line is quickly taking shape into one of the more mobile and formidable defenses in the NHL.

Adam Fox in just his second year won the Norris Trophy and his partner, Ryan Lindgren deserves accolades as well. While Fox is able to join the rush to make jaw-dropping offensive plays, he does so with a peace of mind that comes with having a steady stay-at-home partner.

The Rangers third pair has a bright future with Braden Schneider, who is currently partnered with Patrik Nemeth. However, another defensive pairing is taking shape with a whole different toolset.

Jacob Trouba and K’Andre Miller are becoming a dynamic unit that can either jump into the rush, crush you with a bone-jarring hit, or blast a puck from the point with a cannon of a shot.

K’Andre Miller coming into his own

Miller, 22, is coming into his own by avoiding the dreaded sophomore jinx. In 65 games, he’s scored 5 goals and 9 assists for 14 points while playing top four minutes with partner Jacob Trouba. His 14 points are a career high, and his next goal will also set a new mark.

The Rangers 1st round pick in 2018 (22 overall) has exceeded expectations. Besides having his rookie campaign played during the pandemic last year and getting a new coach this season, Miller continues to develop into a star.

Some credit has to go to Gerard Gallant and his staff for implementing a simpler system.

“It’s just a little bit cleaner. The D are always by the net – it’s obviously man on man,” Miller explained back in October. “You just stick yourself between the net and your guy and you should be good. It’s been an easy transition for our team.”

Since the first game of the season, Miller has learned to use his 6’5 and 210 pound frame to his advantage. He’s strong along the boards, hard on the puck, and is starting to clear the opposition from the crease more consistently.

“Confidence with the puck has allowed me to use my speed and my body a little bit more lately in the second half,” Miller said on Saturday after practice. “Getting reps, seeing things in the game, watching video to make adjustments. That’s the biggest thing for me.”

Miller and his partner Trouba were a +2 in a game where they shut down Sidney Crosby effectively. The Penguins captain ended the night with a -2 rating and was visibly frustrated with K’Andre almost every shift. At one point, Crosby went after him at the end of the second period. Miller didn’t back down a single inch. It was a clear message by him and the team that they won’t be intimidated.

“It’s happened a few times recently,” Miller said about upsetting his opponents. “Throwing the body around, guys take exception a little bit but it’s part of the game.”

Miller’s physicality and toughness along with his overall play has caught the attention of his teammates.

“The kid’s amazing. He gets better every single day,” Chris Kreider said via the team’s YouTube channel. “He’s hasn’t been playing the position all that long which blows my mind because he’s getting those hard matchups every night. He’s been huge for us all season and we ask him to do so much. The sky’s the limit for that kid.”

Miller also has the attention of the most important person in the organization, his coach. Gallant had some high praise for him after the game and today at practice. But he also accentuated the importance of Trouba to the kid’s success.

“He seems to get better every game,” Gallant said on Saturday. “I think he’s learned a lot from his partner. Trouba has been really good for him…Trouba talks to him all the time on the bench whether it’s a mistake or a good play. When you play with a veteran player like that they lead you. Couldn’t be a better partner for him.” 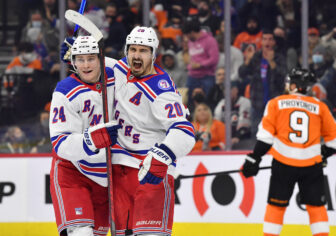 Also Read:
Rangers Kaapo Kakko skating on his own, where will he play when he returns?