The New York Rangers played the Seattle Kraken in a matinee contest looking for a complete 60 minute effort. Instead, they found themselves hanging on thanks to Igor Shesterkin’s amazing goaltending.

Seattle tied it with 68 seconds left in the game, but a blast from K’Andre Miller with 33.7 ticks on the clock sent the Garden crowd home happy.

After beginning the last two games with strong starts and late fizzles, the Blueshirts appeared to be pacing themselves. Meanwhile, Seattle racked up 14 shots on Igor Shesterkin, who had to make three of four big stops.

The Rangers did get on the board thanks to their tremendous power play. A tic-tac-toe play was started by Mika Zibanejad and ended with him scoring in his favorite spot on the ice.

Zibanejad moved it to Jacob Trouba at the point, who gave it back. Mika sent it cross-ice to Artemi Panarin. He then quickly sent it back to him for a left circle one-timer by Phillip Grubauer.

“I thought we didn’t play too bad but we need to get back to our game,” Braden Schneider said during the intermission. “We were shaky with our passes and gave up a few odd man rushes. If we can clean up in the neutral zone… we’ll be better off.”

The New York Rangers did tighten things up early in the second period and were rewarded by keeping things simple.

Less than five minutes into the period, Alexis Lafrenière scored the easiest goal of his NHL career. Zac Jones set up Zibanejad for another one-timer. His shot hit the post and there was Lafrenière to gently tap home the puck sitting in the crease. It was his 9th goal of the season and Jones’ first point on the year.

“Nice play by Jonesy and Mika but that’s what happens when you go to the net,” said Lafrenière, who last scored on January 3 against the Oilers. “It’s always fun to get one and I’ll try to keep it going.”

Unfortunately, that thrill didn’t last long. This time it was a Kraken give and go to get one back just 2:54 later. Jared McCann finished a nice passing play from Jordan Eberle to spoil Shesterkin’s shutout bid.

Seattle kept play in the Rangers end, and once again Igor had to bail them out in several great chances. His goaltending kept the score 2-1 heading into the third period, but the 25-12 shot advantage for the Kraken was concerning.

K’Andre Miller to the rescue

The third period was basically the same as the previous two. Seattle continued ti fire tons of rubber Igor’s way and finally broke through with 68 seconds left.

Zibanejad was in the box for tripping and Yanni Gourde converted a Mark Giordano feed that barely beat Shesterkin short side.

Madison Square Garden was a little deflated, but rose to their feet in elation just 42 seconds later. That’s because K’Andre Miller, who missed on a breakaway prior to the Kraken tying it, blasted home the game-winner.

For Miller it was his third goal on the year, and his first in 27 games. Zibanejad got the only assist off the draw.

“It was great faceoff by Mika… also Kreider ran a little interference– thankfully they didn’t see it,” Miller said. “It’s a great win.”

In the end, Shesterkin made 40 saves to stay undefeated when ever he faces 40 or more shots.

“It wasn’t the greatest game but we found a way to get the two points,” Zibanejad said.

New York will face the Florida Panthers on Tuesday night. 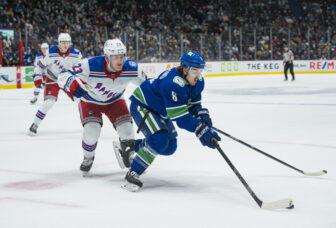