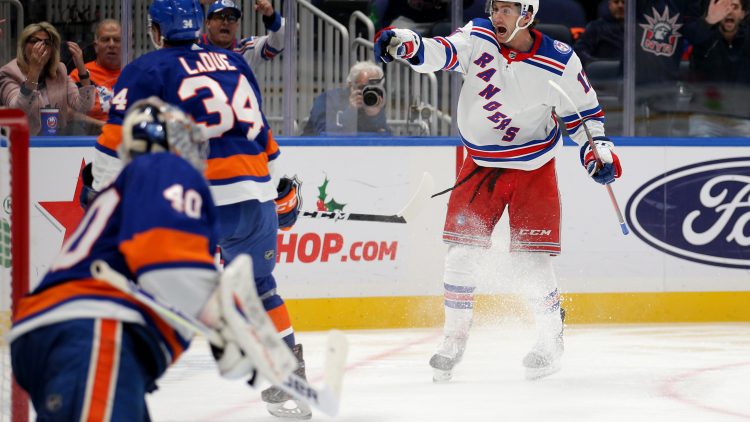 The New York Rangers played their first ever game against the Islanders at the UBS Arena. It took them a little while, but eventually they proved too much for the undermanned and slumping Isles.

Chris Kreider may have notched two goals, but it was the Rangers 4th line that lifted the Blueshirts to victory.

Down 9 regulars, the Islanders came out hard and fast against the Rangers. Was it an act of desperation or was the strategy to try and win it in the first period? Regardless, the Isles gave their biggest rival all they could handle in the opening stanza.

The shots were even in the first period at 8 each, but the Isles made it their mission to lay the body on the Rangers often. After the first 20 minutes ended, the home team had a 10-5 hit advantage.

Mat Barzal was called for hooking just six seconds into the second period and Chris Kreider wasted almost no time making him pay. Adam Fox found Ryan Strome, who sent one down to Kreider for a deflection past Semyon Varlamov at the :29 mark.

“Ryan Strome is so good putting that puck flat on my front foot,” Kreider said about the play. “That misdirection is what opens up so many lanes.”

The Isles would settle things down and get back to taking it to the Rangers physically once again outhitting them 9-6 in the period. Shots were 8-7 Isles and Igor Shesterkin was up to the task on every one.

Then at the 14:28 mark, the Rangers 4th line scored a huge goal. A turnover in the neutral zone set the play as Barclay Goodrow and Ryan Reaves worked a give-and-go. Goodrow’s shot came back to him and he found Kevin Rooney alone in the blue paint for an easy 2-0 lead.

In the third period, Andy Andreoff would cut the lead in half off a great deflection at 3:52. The goal set the UBS Arena into a roar with the crowd chanting loudly, “Let’s Go Islanders!”

Then just 20 seconds later, Reaves would come down the left side and dangle the puck on a string. He patiently waited to make a pass around an Isles defender to Rooney, who put home his second of the game.

The Islanders fourth line coming into this season was considered the best in the league. They were dubbed the team’s “Identity Line”. Chris Drury made it a point to improve his 4th line. He went out and got Goodrow and Reaves this summer and with Rooney they’ve become the team’s “Swagger Line”.

“It’s like we are in the movie Interstellar, a parallel universe – it was fun,” Reaves said about his line’s big game. “If you want to win the Stanley Cup, you need to have depth.”

Chris Kreider would score his second of the game and 15th of the season to end any idea of an Islanders comeback at the 11:02 mark. Kaapo Kakko would make a great play in the offensive zone getting the puck to Mika Zibanejad. He turned it around quick and found Kreider for a great tally for the 4-1 lead and eventual final score.

“They were great, they did their job tonight obviously,” Gerard Gallant said about his 4th line. “Reavo made some great plays, Rooney got a couple of goals, and Goodrow was great. Our 4th line was the difference for me tonight.”