The New York Rangers will officially get back to work in about two weeks. Head coach Gerard Gallant and his coaching staff have a few things to consider when it comes to the 23 man roster. There are also plenty of questions that need to be answered in a very short period of time.

Some of those questions can be answered in the short term and others being more complex could take time. However; the answerers could impact the season and have playoff implications.

Will Igor Shesterkin have a better start this season?

General manager and President Chris Drury locked in his goalie of the future in August. Igor Shesterkin signed a four-year, $22.66 million contract. The weight of Rangerstown is fully on the shoulders of the Moscow, Russia native.

Shesterkin felt the impact of filling the skates of Henrik Lundqvist last season. The 25-year-old had a rocky start winning just four of the first 13 games (4-8-1) he appeared in.

The Rangers key to a successful season relies on winning games early and often. Shesterkin is going to have to find his comfort level quickly, something he is very capable of doing as he enters his first full NHL season as the team’s number one goalie.

Can he steal some points early on in the season while his teammates find their way with a new head coach a new system? That answer being in the affirmative would be a big one.

Chris Kreider must be consistent

Chris Kreider can be that player to infuse energy into the team. A great skater, a sniper when the puck is on his stick, CK can singlehandedly take over a game at any moment.

Then there are the long stretches of games where you would never know he was on the ice.

The inconsistencies of the 30-year-old are the most confusing aspect of his game. The Blueshirts need Kreider’s top performance every night. Many believed he should be wearing the “C” on his sweater especially after he signed a contract extension in February of 2020.

Kreider needs to be the leader this team desperately is in search of. He netted 20 goals with 30 points in 50 games, but many of the goals were scored in the first half of the season. In his final 25 games, Kreider scored just seven goals with 14 points.

The pressure is all on his shoulders this season with the KZB line removed after the trade of Pavel Buchnevich. Add in the emergence of Alexis Lafreniere and Kaapo Kakko, Kreider could see himself as one of the most expensive third line players in the NHL if he has a slow start to the year.

Also Read:
Chris Drury talks Rangers kids, getting tough, and naming a captain for the 2021-22 season

Can the Rangers and Zibanejad settle on a new contract?

Hockey is a business first which comes with a lot of strategies and predicting what is best for both the team and the player. Mika Zibanejad will be an unrestricted free agent at the end of this season. He is certainly going to be looking for a long-term deal in the neighborhood of 7 to 8 years with an annual payout of $9 million (at the very least).

Zibanejad has also been referred to as the unofficial captain for the Blueshirts by some fans. There is no denying the heart and soul he brings to the ice and in the locker room every day.

He also has plenty of leverage with his no-move clause which would restrict where the team could trade him if the two sides are unable to agree to a new deal.

Zibanejad has grown into a star on Broadway appearing in 323 games over the past five seasons. During that time he has found the back of the net with 136 goals and 283 points. His career 49.4% face-off percentage is the only flaw in his game since his arrival from the Ottawa Senators in July of 2016.

Chris Drury needs to figure out a way to negotiate with the 28-year-old who hails from Huddinge, Sweden without distracting the team. 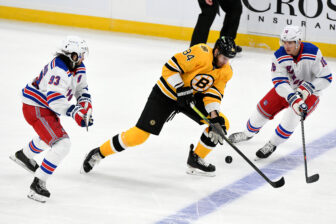 Strome must continue to produce

Another UFA this season is Ryan Strome. He has produced in every situation the team has put him in, but his partner in crime over the last two seasons has been Artemi Panarin.

The duo of been producing goals and points on a consistent basis and Strome displayed his ability to add to the scoring sheet even without Panarin. That was noticeable when the Russian phenom took a nine game leave of absence during last season.

As is the case with Zibanejad, a decision with Strome will need to be worked out prior to the trade deadline. The two differ as Strome doesn’t have any NMC or NTC clauses in his contract. Should the Blueshirts decide to trade him, they could do so with any team.

Strome does need to be better in the dots. Last season, he only won 43% of the draws he took. In an era where puck possession is crucial, the Rangers didn’t possess the puck that often when he was standing at the circle.

Gerard Gallant needs to live up to expectations

When training camp opens, a new face will be behind the bench. Gerard Gallant is now at the helm of the Rangers ship.

He has a reputation of coaching clubs that are tenacious, find ways to win both hard-hitting games and high-scoring games.

He took the Vegas Golden Knights to the Stanley Cup Finals in their expansion year. This Rangers team is in no way close to the expansion club Gallant had, but the pressure of playing at Madison Square Garden under the “original six” banner is something he has never experienced.

Gallant will have to balance a roster of veterans, second-year players, and rookies while playing a tough schedule that will have the Blueshirts playing only three home games in the first 12 games of the season.

Team bonding will be automatic, but the coach will need to keep the team focused if they struggle out of the gate.

This will be a different team with a different look than the previous one coached by David Quinn. Gallant has stated he will give rookies and younger players every opportunity to make the squad and play minutes in games.

There is so much going on with the club and training camp has not even begun. One thing is certain, with this new front office, coaching staff, and some fresh faces in the locker room the rebuild is over.

This year’s New York Rangers are like every other team beginning the 2021-2022 season. Optimistic of what they can achieve, but it’s a team full of questions that may not be answered until sometime during the year.

The NHL’s 2021-22 season is almost upon us. There are a multitude of great storylines from the inaugural season of the Seattle Kraken to the Alex Ovechkin’s hunt for immortality in the NHL record books. Read more!