“I don’t make excuses but we looked like a tired team,” head coach Gerard Gallant said after the New York Rangers were blown out by the Colorado Avalanche at home 7-3.

The team plane landed in New York around 2:30 AM after beating the Blackhawks 6-2 the night before. Jet lag looked like a factor last night. As did having an inexperienced young goalie making his NHL debut against the best offensive team in the NHL.

Adam Huska was peppered with high quality shots all night and in the end could only save 32 of the 39 sent his way. “I told him it was a team thing and to just go in there and battle his ass off,” Gallant explained about his decision to not pull Huska from the game.

Nathan MacKinnon started the dominating second period by scoring his second goal of the season at 4:48, tying the game 2-2. Nazem Kadri gave Colorado the lead for good 83 seconds later and Alex Newhook scored a power-play goal midway through the second.

Logan O’Connor scored twice in 22 seconds late in a five-goal second period for the Colorado Avalanche, who concluded a five-game road trip with a rout of the New York Rangers on Wednesday night.

He put the Avalanche up 5-2 at 17:14 when he breezed past Rangers defenseman K’Andre Miller and lifted a wrist shot from the low right circle over Huska.

O’Connor then recorded his first career multi-goal game when he finished off a breakaway following an errant New York line change.

“We just gave them too many scoring chances, too many opportunities,” Gallant said. “We opened the door for them, didn’t play strong defense like we had to, and we talked about it. They took advantage of it.”

When it was over, the Rangers 7 game win streak was snapped and their run of 8 consecutive victories at Madison Square Garden had come to a close.

Rangers already putting it behind them

After the game, the message from the team was consistent. Despite their disappointment, they understood that this was eventually going to happen. Every team has an off night, and the Blueshirts are no different.

“I feel like you want to win every game,” Barclay Goodrow said. “With the start that we had in the first period, battling back to have the lead after the first. Then the second period just got away from us. The one good thing is with so many games coming up you can put it in the rearview mirror.”

Jacob Trouba, who opened the scoring and then completed his second Gordie Howe Hat Trick in consecutive games, was ready to move on.

“We had a lot of good games in a row – you lose one, not going to dwell on it,” Trouba explained. “We’re in a heavy stretch of hockey until Christmas. You’ve got to move on quick and worry about the next game.”

Filip Chytil added a late tally and rookie Nils Lundkvist got his first career goal during a power play as the Rangers lost in regulation for only the second time in their last 13 games.

“We’ve been on a good run,” Gallant noted. “We’ll bury it and go on to the next one. I’m not worried about it one bit. I’m not happy about losing, but we move on to Buffalo.” 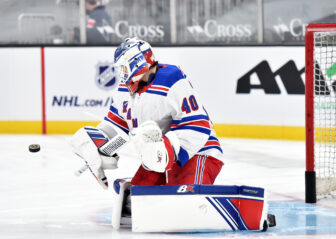