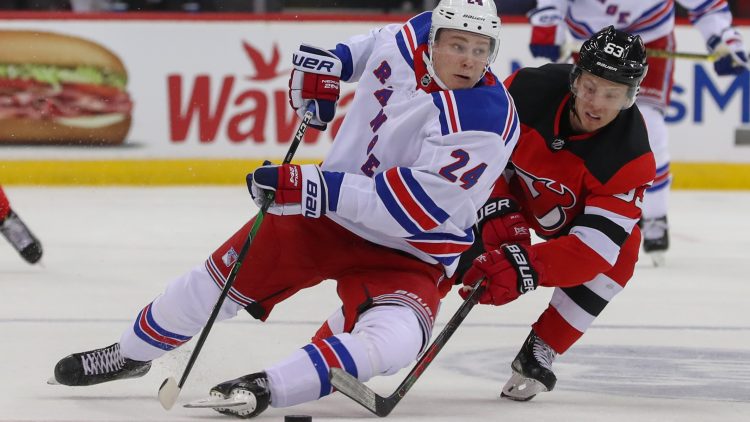 The New York Rangers were shut out 6-0 Saturday night in Calgary. Being blanked in the final game of another long road trip isn’t a problem in and of itself to sound the alarms. However, the Rangers have lost three in a row, albeit two in OT, and continue to struggle to score goals.

More problematic was that they had a total of four even strength goals to their credit in those losses. All of which came in the 6-5 OT defeat to the defensively inept Edmonton Oilers.

That’s a microcosm of a bigger issue this season, a lack of even strength scoring.

The Rangers have 29 goals in 12 games this season, which ranks them 27th in goals per game average at 2.42.

Only 17 of those tallies have come at either 5v5 or 4v4, which ranks them 26th for even strength goals. A paltry 1.41 goals per game with no change in manpower is becoming a huge issue, but there’s more to it.

If you weren’t a big fan of trading Pavel Buchnevich, this isn’t going to ease your displeasure.

Here’s the list of Rangers players that are considered RW and their stats this season:

A combined 42 games and a grand total of three goals all by Barclay Goodrow and 9 points. Only two of the five players that play right wing have even managed to hit the scoresheet.

Buchnevich isn’t exactly lighting it up in St. Louis, but he does have two goals and three points in 7 games.

I’m not sure how much longer Chris Drury will let this go. However, there is a growing concern with Kakko’s lack of scoring this season. The decision to send Vitali Kravtsov a message by starting him in the minors and giving players like Dryden Hunt and Julien Gauthier a roster spot has also backfired – big time!

Hoping that Alexis Lafrenière would be able to make an easy transition to the right side with Chris Kreider and Mika Zibanejad also failed spectacularly. Kreider himself looks better on the first line left side, which now has career bottom six forward Goodrow as your top right wing.

The rumblings around the League is that Drury is starting to poke around to see what’s out there. Remember, the Rangers have cap space this season to pick up a scorer for some help. CapFriendly currently shows them with $8,018,406 to play with.

Options for the Rangers via trade

The wisest thing for Drury to do is not handcuff himself by trading for a player with term. Vladimir Tarasenko would be a great fit, but has one more year remaining on a deal that pays $7.5M. Unless, the Blues eat half of that (which they won’t), there’s no deal unless a third party gets involved.

Another option is Phil Kessel in Arizona. The 34 year-old is dying to get out of the desert and would welcome a trade to the Big Apple. His cap hit is currently $6.8M thanks to the Leafs eating a portion of the $8M contract. If Arizona were to eat half, that would even allow the Rangers to make another move at the deadline. Kessel has 5 points in 12 games this season and will be a UFA.

Here’s a name that was brought to my attention by a knowledgeable source, Filip Forsberg in Nashville. The 27 year-old will be a UFA at season’s end and has 7 points in 9 games. The right-handed shot likes to play on the left side, but the versatile Swede can slot into any of the three forward positions. A pairing of Forsberg with Zibanejad already sounds tantalizing and the Rangers may have long term interest in him.

Another possibility, although unlikely as long as the Sharks keep being competitive is Tomas Hertl. The 27 year-old center will be a UFA this summer and the jury is out if the Sharks will trade him or not. His current cap hit of $5.625M makes him very affordable for the acquiring team. Hertl has 8 points in 11 games this season.

If the Rangers were to acquire Hertl, than what they are also effectively saying is Filip Chytil as a center is done. The 22 year-old Czech will need to move to the right wing, where he’s had success before.

Also Read:
The Good, the Bad, and the Uncertain of Rangers GM Chris Drury’s moves so far

Who are the top trade candidates? What does Torts want to do? And former Rangers in the Blackhawks front office? Read about it here.