The New York Rangers looked strong for half a game, then looked abysmal for the final 30 minutes. Stop me if you’ve heard that song before. In the end, the laid an egg in a 5-1 loss to the Washington Capitals.

“Two different games,” said Gallant after the clunker. “I thought the first 33 minutes we were really good even though were behind 2-0, a couple of power play goals that they scored. They got the bounces on both of them. But I thought we played a [heck] of a 33 minutes and after that we weren’t too good.”

The rationale person should not overreact to losing one game. And just because it is the first game the season, doesn’t really give it any more weight in the standings. Still, it wasn’t the loss but a series of questionable moves that led up to the defeat that have many scratching their heads.

Let’s begin with the most obvious and glaring decision of them all; starting back up Alexandar Georgiev.

Gerard Gallant has said multiple times that he will let Benoit Allaire handle the goalies, including who plays. Maybe Allaire did indeed say to start Georgiev, but what if it was after Gallant said I want them to split these two games first?

Regardless, how do you start the season against a division rival, whom supposedly put such a bad taste in your mouth that you fired your President, GM, head coach, and others with your backup? How do you not start the goaltender you rewarded as your number one with a nice new contract? Igor Shesterkin is 25 years-old, I am pretty sure he could’ve played games 1 and 2 of the season despite being back to back.

This would’ve never happened to Henrik Lundqvist during his prime. Matter of fact, someone who knows Hank well explained to me that he wouldn’t have left Gallant’s office until he was named the starter.

Bottom line, this is a call to Igor to start speaking up and telling both Allaire and Gallant ‘that’s my net.’ 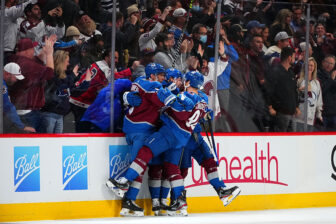 Gallant playing Tinordi and Hunt made no sense

The Rangers were 1 for 5 on the PP last night. Why wasn’t PP QB specialist Nils Lundkvist in the lineup? Why was the long awaited first round pick from the 2018 Draft not manning the point on the second unit?

Obviously Gallant, who hasn’t coached in the NHL since January of 2020, wanted to go with a beefy lineup against Tom Wilson and Caps. I guess Ryan Reaves, Sammy Blais, and Barclay Goodrow weren’t enough. It’s not like he didn’t already have Jacob Trouba and Chris Kreider out there too.

If the Rangers actually game planned to use all that size to take runs at Tom Wilson and to try and fight the Caps off their game, I would understand. Instead, they went out and tried to beat a more cohesive and experienced team that are considered Cup contenders without better offensive players.

Tinordi was fine, finishing with a -1 rating on just 13:53 of ice time. But the Rangers needed more than fine to win last night. Plus, Gallant didn’t look comfortable rolling Tinordi out there as the defense pairings were mixed and matched for the most of the night.

Same goes for Dryden Hunt, who played a team low 9:46. Why not use Julien Gauthier who supposedly beat out Vitali Kravtsov for a spot on the third line? It simply was not the best possible roster in many minds.

By the way, let’s not just blame Gallant for the Kravtsov drama because there’s plenty to go around. Forever Blueshirts has learned that Chris Drury was never really a fan of the selection, which likely explains why he overhauled the scouting staff as soon as he took over.

The Rangers take on the Dallas Stars tonight with Igor Shesterkin confirmed to start. No word yet on if Nils Lundkvist will play, but Gallant certainly needs to put a solid lineup out there and get that first win in the books. 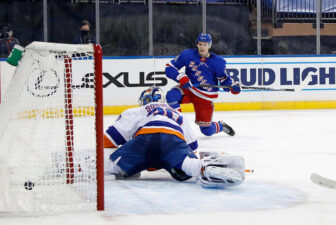 Recap: Rangers lose to Ovechkin and the Caps

Get the game breakdown here.