If all else fails New York Rangers could trade for J.T. Miller

According to recent reporting by Darren Dreger on TSN’s Insider Trading, the Vancouver Canucks are very much listening to offers for Miller and pending RFA Brock Boeser.

“The Canucks are interested in listening, [GM] Patrik Allvin I’m sure is very busy, but the Canucks aren’t just in the market for draft picks,” Dreger said. “They need good, young players, NHL players in return. It’s going to be a very interesting off-season in Vancouver.”

With the Rangers cap strapped as pending UFA’s Andrew Copp and Ryan Strome are looking for at least 5-year deals around $6 million each, Miller may present a cheaper one year option.

Miller, 29, was the Canucks leading scorer with 99 points in 80 games this past season. He has one year left on his current deal which comes at a very affordable $5.25M cap hit. Speculation has his next deal expected to be in the $8.5M AAV range for at least 5 years.

Honestly, that is not a contract the Rangers will be able to do in 2023-24 considering they will need to re-sign Alexis Lafrenière, K’Andre Miller, and Filip Chytil. Which makes his acquisition a Cup or Bust type move.

So what would it cost in assets to acquire Miller? Ultimately that will depend on the market demand, which Dreger noted almost every team in this year’s playoffs would pursue.

When talks were hot and heavy leading up to the trade deadline, I felt a package of Nils Lundkvist, Chytil, and at least first-round pick could get it done. After trading for Andrew Copp and making it to the Eastern Conference Final, the Rangers don’t have a first rounder in this year’s draft.

Of course, a first-round pick in 2023 may be just fine for the Canucks if they are getting back Nils Lundkvist and another top prospect. Leading me to pending RFA, Kaapo Kakko because that’s the player Vancouver will ask for.

Would a package of Kakko and Lundkvist, sans a first-round pick, make sense for the Rangers who believe they can win the Cup next season? What if the Canucks were also willing to retain 50% of Miller’s salary? That would also give Drury the ability to re-sign Frank Vatrano and Tyler Motte.

It’s a tough question to answer, and if I’m Chris Drury, I will be looking for other ways to acquire Miller without giving up Kakko at this stage of his career. Especially, if you are going to let Miller walk.

Unfortunately, Vitali Kravtsov isn’t likely to move the needle for the Canucks. Brennan Othmann is off the table and I don’t think Will Cuylle is going to get it done either.

In the end, all signs point to re-signing either Copp or Strome. However, if both players are pushing for more than 5 years, $6 million, and full no-trade clauses it may force Drury’s hand to address his need for a 2C.

Depending on the where the market is, Miller may make sense as long as Kakko is not in the deal.

Note: J.T. Miller was used as a winger but can also player center. His potential chemistry with Artemi Panarin and ability to be effective at that position is a major consideration. 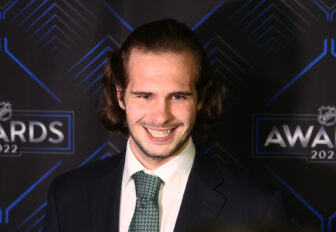