The New York Rangers were looking to put Thursday’s disappointing loss behind them when they took on the Ducks in Anaheim. They did so with a makeshift lineup thanks to injuries and COVID.

Ryan Reaves was added to COVID protocol just prior to the opening face off. That allowed Morgan Barron to get into the game. Tim Gettinger and Jonny Brodzinski also stepped in for Julien Gauthier (COVID) and Dryden Hunt (upper-body).

The first period was all Rangers as they did everything but score. Well, actually, they did.

While on the power play, there was a scramble in front that Anthony Stolarz eventually put in with his pad. The goal was waived off as the referee lost sight of the puck. The Rangers outshot the Ducks 12-7 in the opening frame, and won 63% of draws.

“We’ve got to get bodies and pucks to the net. I think that’s cliché bit it work,” Alexis Lafrenière said during the first intermission. “If every line does that we’ll be a pretty good team.”

Anaheim picked up the pace in the second period by pressuring the Rangers in their own zone. That eventually led to a costly turnover by K’Andre Miller to Troy Terry, who found Isac Lundestrom heading to the net. The center put it by Alexandar Georgiev for the 1-0 lead with 8:55 remaining.

However, the Rangers would respond 2:55 seconds later. A shot by Jacob Trouba hit hard off the boards and was corralled by Kaapo Kakko. The youngster tried to sneak it by Stolarz but was thwarted. Kakko stuck with the play and found Mika Zibanejad on the short side to tie it.

For Zibanejad, it was his 7th goal and 11th point in the last 8 games. “We played a pretty good game all through the 60 minutes and that was the difference,” he said afterwards.

And the defense to the rescue

The Blueshirts came into the the third period with a 9-0-1 record when tied. It didn’t take them long to grab a lead and improve on that stat.

Jarred Tinordi threw a shot at the net that went off a Ducks’ defender for the 2-1 lead just 1:46 in. The assists went to Filip Chytil and Kevin Rooney. The goal was Tinordi’s first with the Rangers and only the second of his NHL career which spans 108 games over 7 seasons.

At the 9:58 mark it was another defenseman not know for his offense that extended the Blueshirts lead to 3-1.

Ryan Lindgren’s shot from the top of the point beat Stolarz thanks to a great screen by Tim Gettinger. Adam Fox and Morgan Barron would pick up the helpers.

“We play our best when we play simple,” Lindgren said. “That was something coach stressed to us tonight. We played a really smart third period.”

The Rangers would ice it on an empty net goal by Lindgren as he was coming out of the penalty box. When it was all said and done the Blueshirts absolutely locked it down and outshot the Ducks by a wide margin of 40-14, including 20-3 in the final stanza.

New York became the fourth team in the NHL to hit 50 points this season. They are now tied with the Carolina Hurricanes for first place in the Metro Division.

“We played a real good solid hockey game all around,” Gallant said smiling. “We got a lot more rubber to the net then we have in the past and I’m pretty happy with that.” 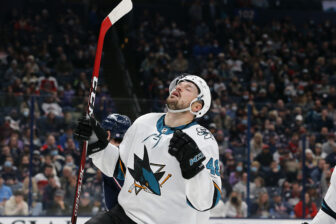